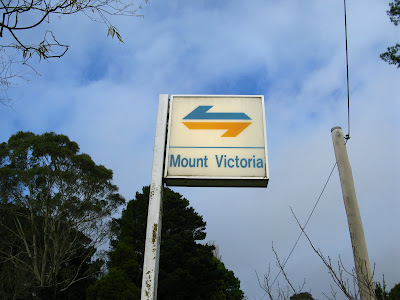 In a rushed attempt to get fit for the ski season, Dana and I have been doing as many pack hauling trips as possible. Add in the odd fast trail walk/run in the hope of building up some endurance and we may just take the edge off the pain when the first trip comes up.

I've enjoyed taking a back seat in the trip plans lately as Dana has discovered the joy of learning to navigate properly by map and compass. On this particular trip we headed to Mt Vic to visit the falls, then on to Bluegum Forest following the Grose river before camping the night. The following day it was on to Blackheath via Perry's Lookdown.

The weather forecast for cool conditions and scattered showers made great walking weather. We caught the train to Mt Vic and headed off a little late (10am) after missing the first train. 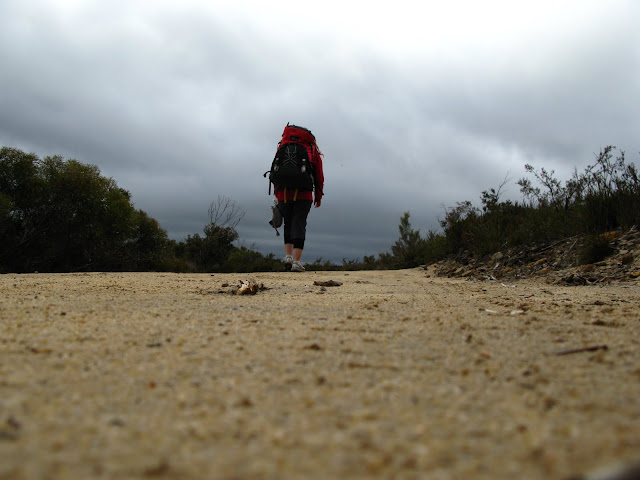 The first days distance was around 15 or more K's including the road bash from the station. I fiddled around taking photo's and generally slowing the progress down knowing the head torches would be used to finish the last few K's into camp. 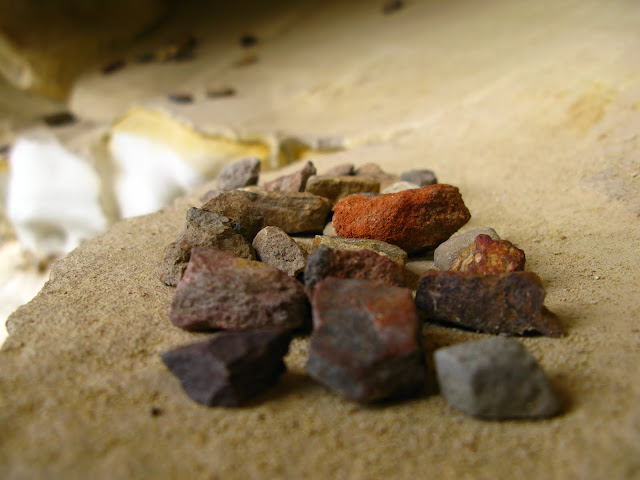 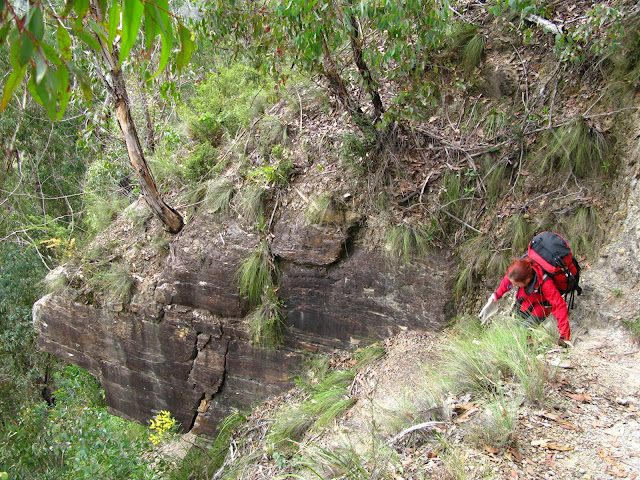 Dana has been battling an ongoing knee problem but as usual gritted her teeth and dealt with the pain quietly while climbing down to the Falls. 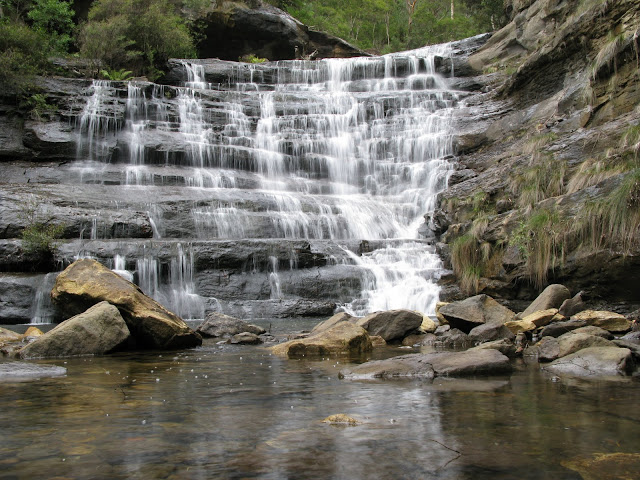 The falls were looking good with a bit more water than I have seen in the past, and I wasted some more time with the camera at each of the cascades. 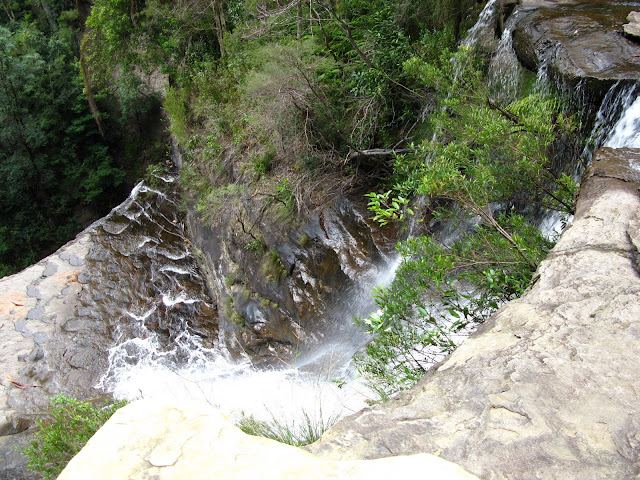 I think this sign has been in place for a while! 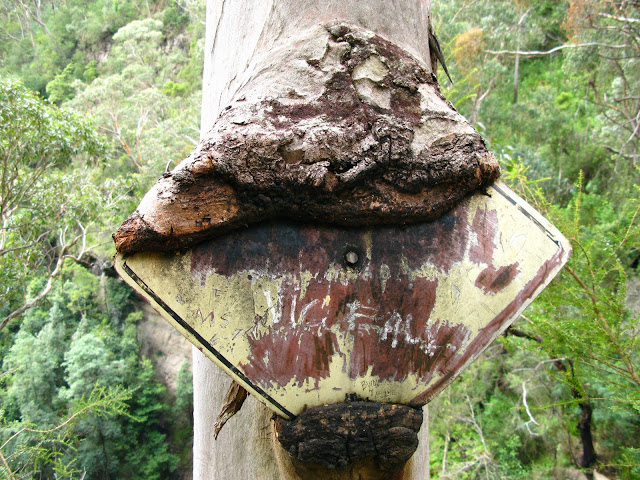 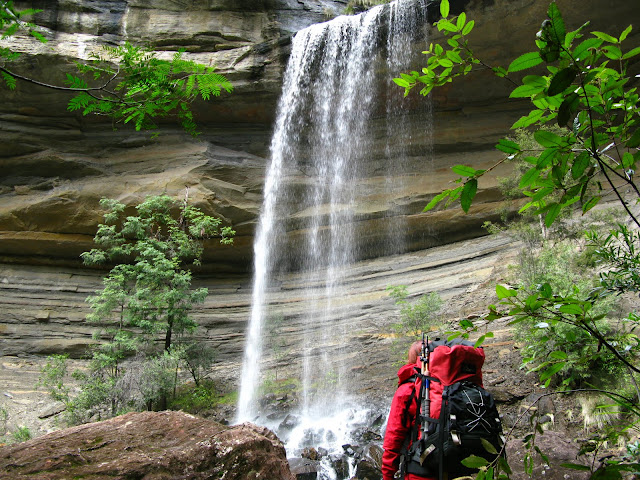 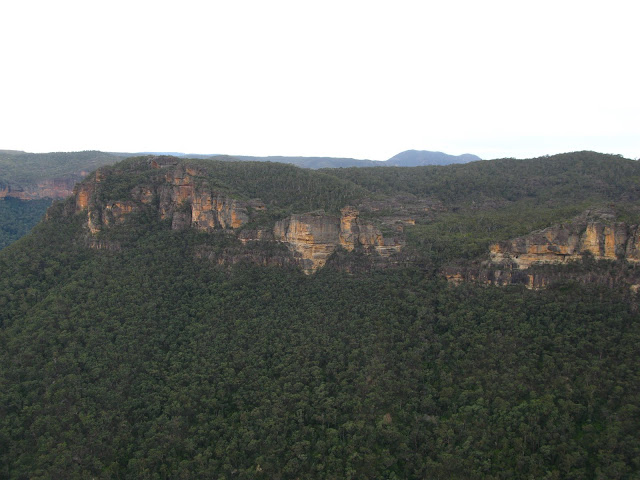 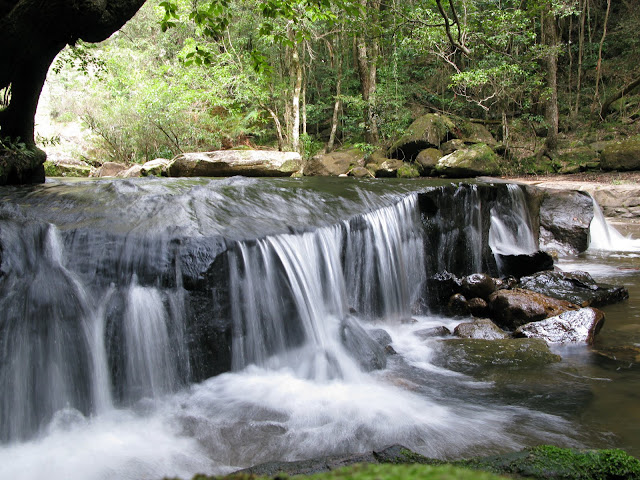 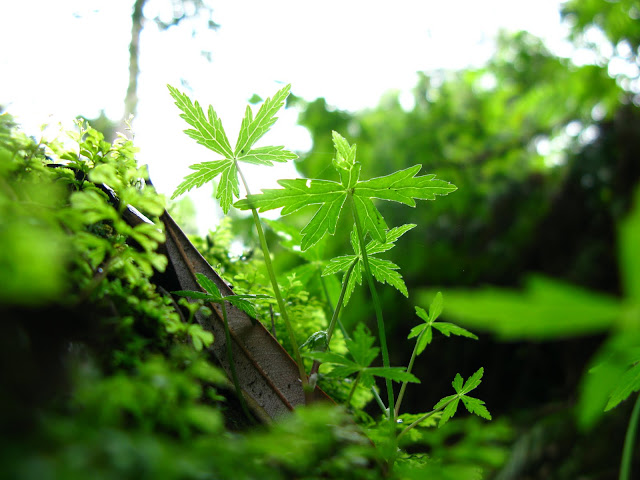 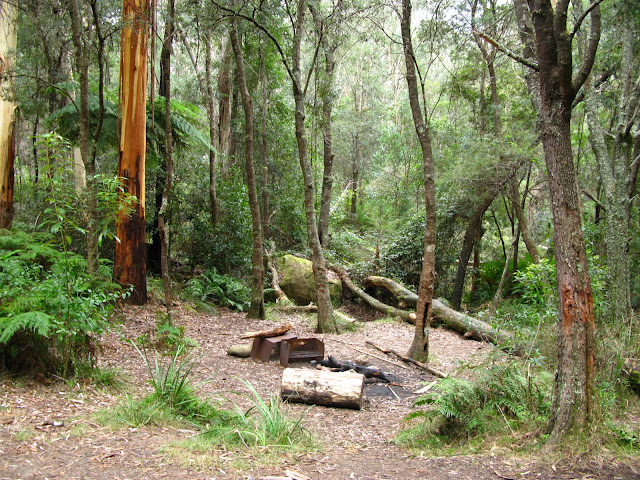 We had a late lunch at Burra Korain flat before following the Grose river on to Bluegum Forest. I can see a potentially great packrafting river in the Grose, but need to get back for a visit in higher water. Unlike the Colo, this would be a consistent series of rapids which would require a bit more concentration to descend safely. I'd like to do the junction of Victoria creek down to Bluegum Forest but I don't think the catchment is all that large to run this upper section. It may require a huge dump of rain which would probably dissipate quickly. 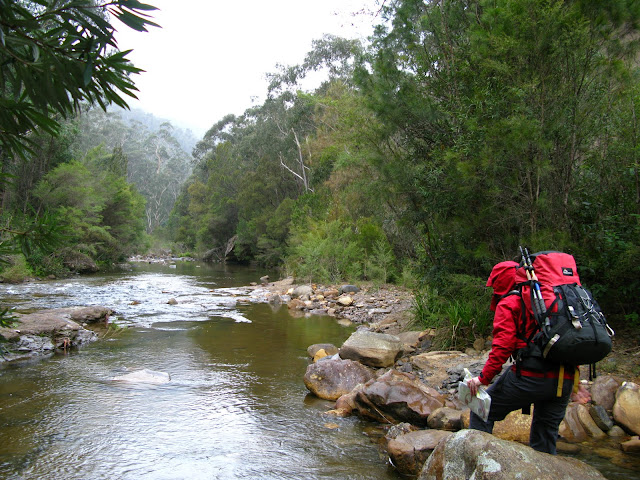 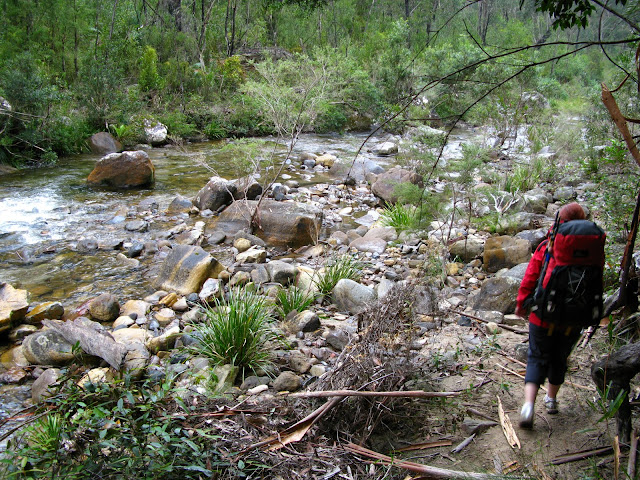 I was surprised at how clear the water was after packrafting other creeks and rivers, although it wouldn't be all that clean from a pathogen perspective.
I found THIS to be an interesting story on the river.
We bumbled along and arrived at camp under head torch and after dinner and tea, fell asleep to the sound of rain setting in. 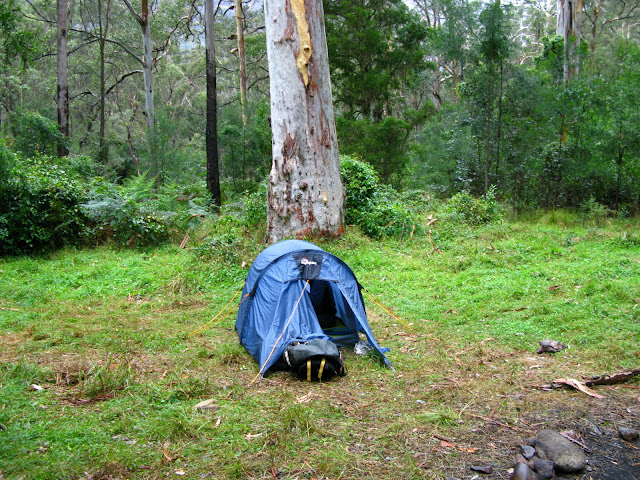 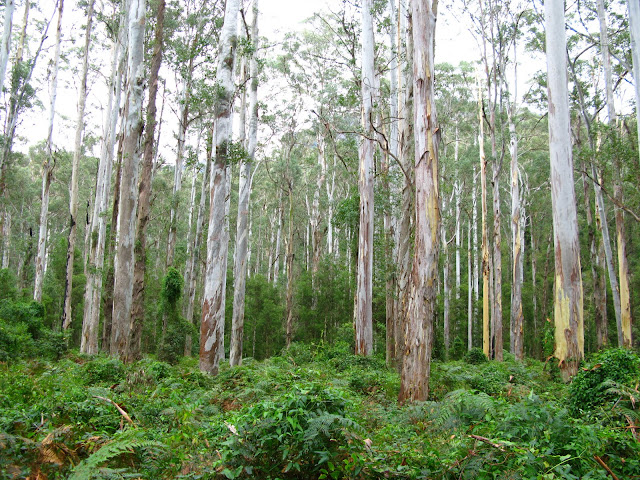 The rain continued on and off for the next days walk which saw us wander through some fairly impressive Gums. As we climbed out of the valley the wind picked up and the temp dropped noticeably. 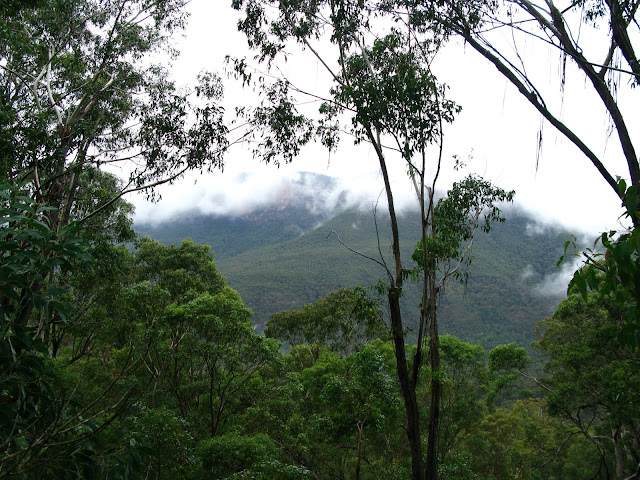 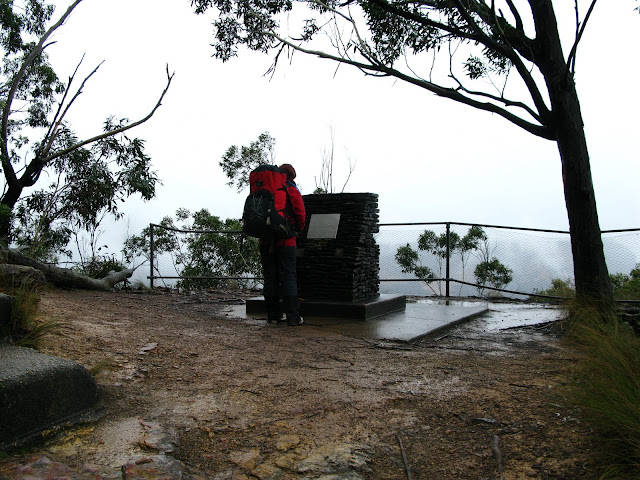 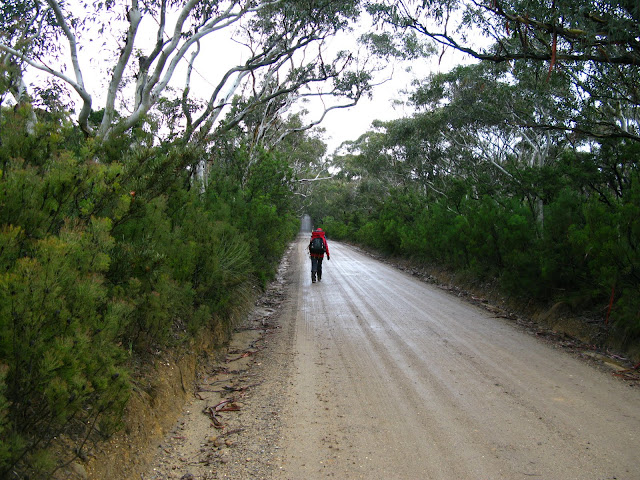 ....and so began the road bash back to Blackheath station, pies, coffee and eventually the hustle that is Sydney.
Posted by D at 10:07 PM