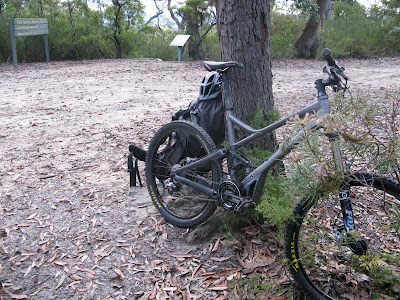 I decided to head up to Canoe Creek for a paddle down to Bob Turners track on the Colo River after hearing it was a good two day trip. From what I'd read on the interwebz, most people do it on Lilo's but this trip sounded perfect for Packrafting.

Without an option for a car shuffle due to circumstance, I took my trusty all mountain steed for the 24 kilometre ride to the start of the walk in point. I arrived at the Bob Turner track to drop the car off and got under way at 6.30pm on friday night thinking I could easily cover the distance on the bike before dark. As usual things never go to plan.....

Literally two minutes from the car, my chain snapped. I had two options.... Walk or take the bike and roll down the hills which in theory would be twice as fast as walking but still slower than riding. This is the second chain I've snapped from riding with a heavy pack. So with thoughts of "You idiot", scrolling through my head, off I went pushing the bike up the hills.
I was able to "scooter" the bike on some of the flat sections and rolled down the hills somewhat slower than normal. 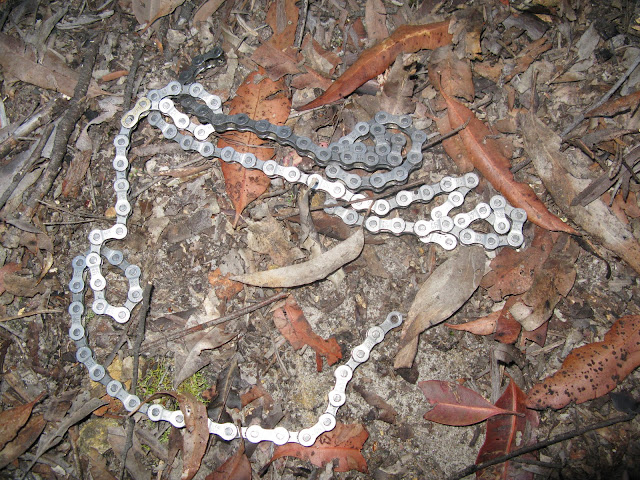 I started to fatigue one leg from scootering and as it got dark, I pulled out the head torch and map and tried to keep track of the fire trails so I didn't miss the Grassy hill fire trail.
At 9.00pm on the dot I reached the trail after 15 k's and decided to head a further kilometer down and setup camp for the night. 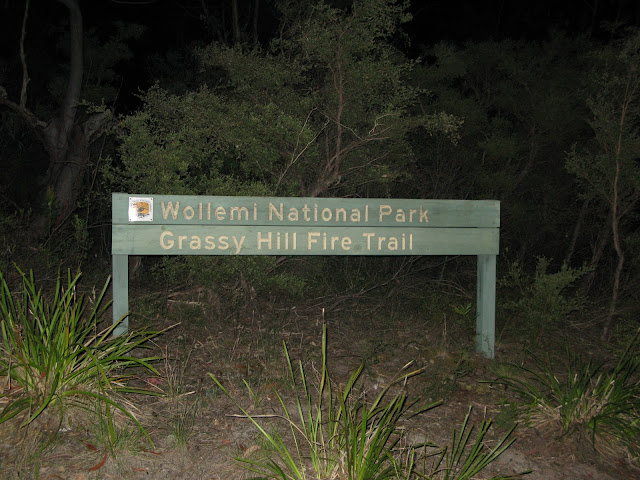 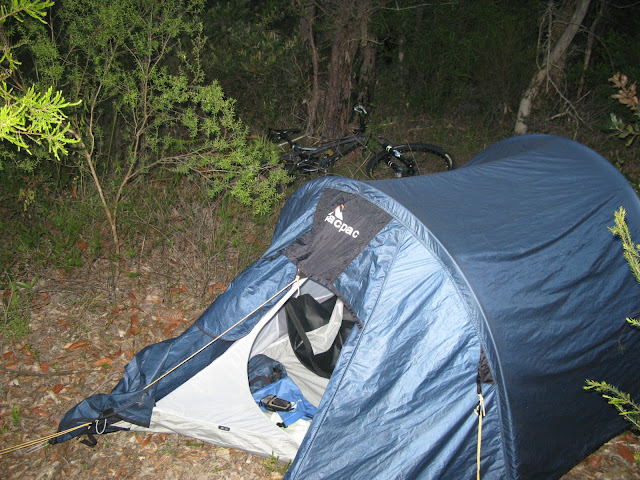 I was fairly tired after a busy day at work plus the 15 or more k's so I set the alarm for 5.00am and crashed.
At 6.00am I was up, and ready to roll after eating and packing up. It took 1 hour to do the 6k's to the gate which marked the start of the Canoe creek trail so after stashing my bike in the bushes and chaining it to a tree it was off down the trail for a 2 k walk to the Colo river. 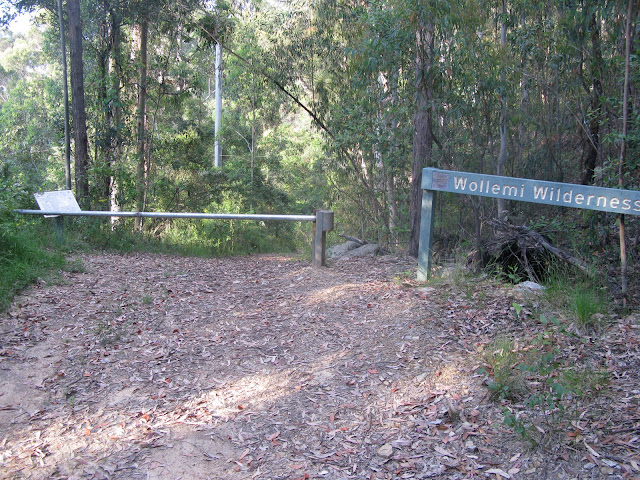 After a while the single track down into Canoe Creek proper started and the grade became fairly steep. My legs turned to jelly which had me wondering about my overall fitness and whether I was getting old. 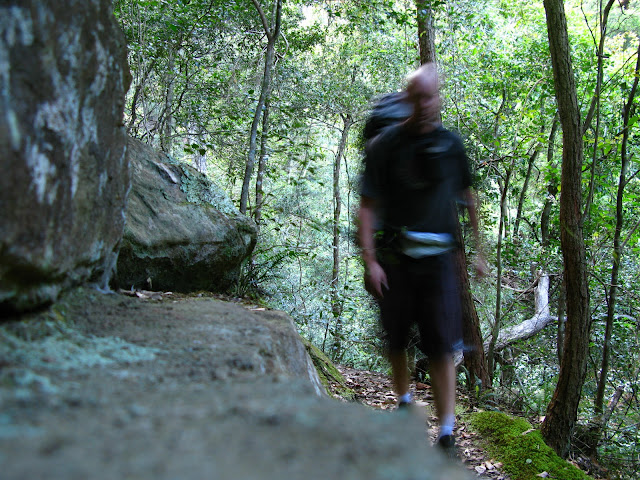 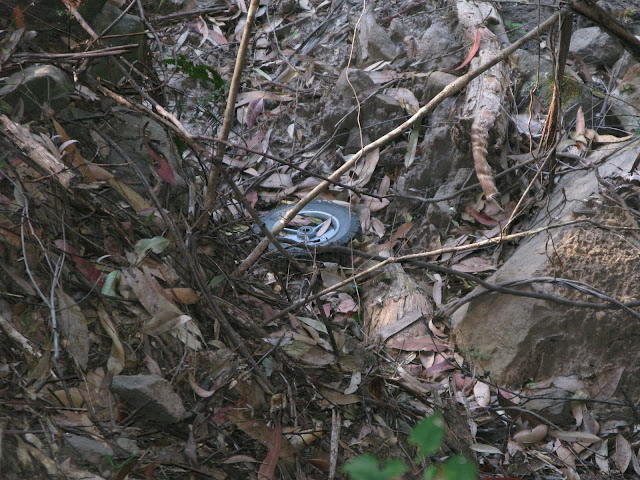 There were remnants of broken kayak trolleys, lost wheels, and scrape marks from hauling canoes and kayaks down the steep gully. Just before the final drop to the Colo, a beautiful 180 degree view of the river spread out before me. It was an amazing vista of a spectacular gorge snaking it's way through some fairly remote wilderness in the Wollemi National Park. 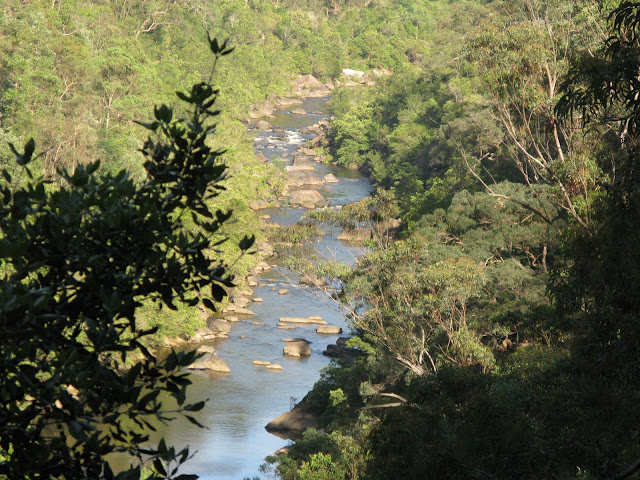 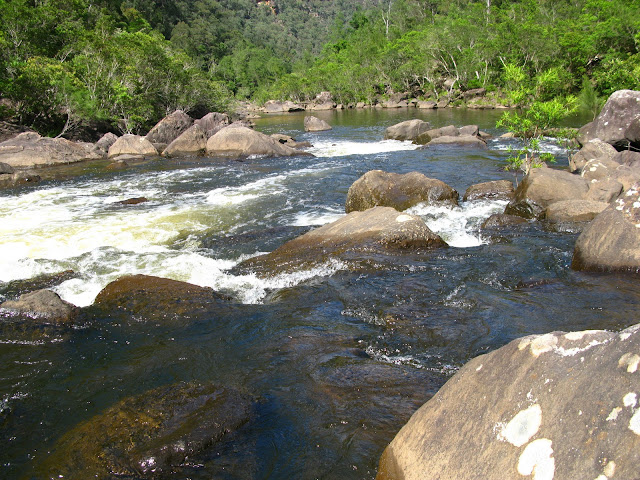 I arrived at the river at 8.30am after an hour and a half walk in. I wasn't sure what to expect of the river from a paddling perspective as I hadn't been up this far, but as the first rapid came into view excitement took over and I was into it.
The guide I had read said it was 20 kilometers of grade 2-3 with one grade 4 (King rapid) but as it hadn't rained for a week, I figured it couldn't be too bad. The first rapid came up pretty quick and I managed it with no problem, even with a two day load on the front.

The rapids could be scouted from the boat so I hit the second one fairly quickly. I came out and before I knew it was under water bouncing over boulders.....I came up without a paddle or a hold of the raft!

I managed to dive over to the raft and hold footing mid rapid searching desperately for any sight of the paddle...Nothing for 20 seconds..... then the boulders released their hold and out it shot from the cauldron upstream and I grabbed it as it came speeding past.

I was laughing at my inability to get down these relatively small rapids with out coming out. 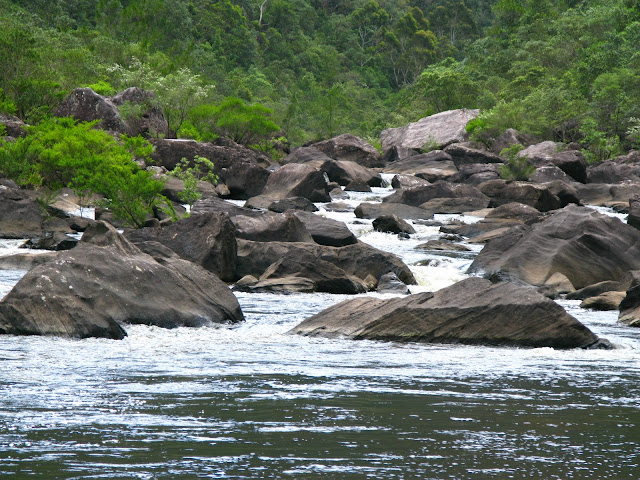 As the day progressed though I realised with growing confidence that coming out of the boat was just part of the game and ended up in the drink three or four more times. I was truly having fun and thought what a great weekend away. Solitude in an amazing gorge, interspersed with a rush of adrenaline every so often. 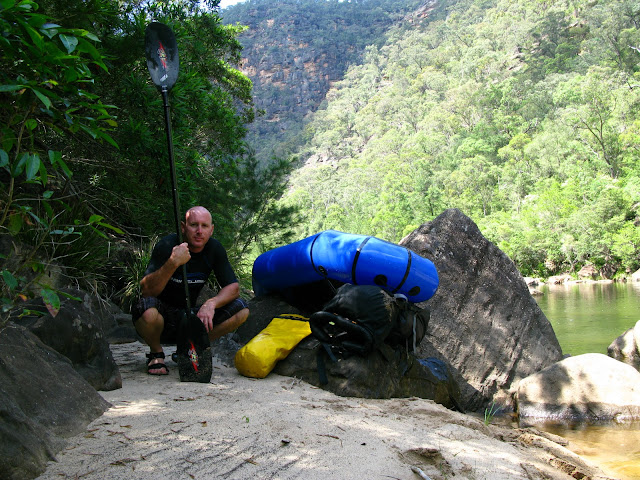 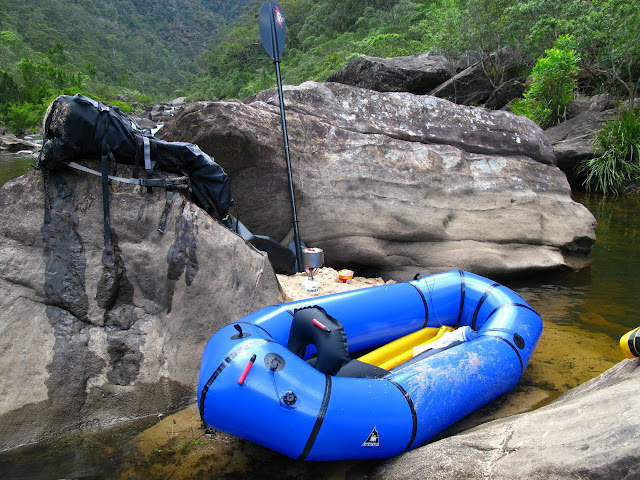 I reached the junction with the Wollongambe river at 1.20pm and had a quick lunch of noodles and chocolate, washed down with the last of my drinkable water. I refilled and purified another two litres for later.
I realised that I was making great time and if I continued the pace I could actually make it out in one day. The river section was 20 k's and I had planned to camp again somewhere on the river but after checking the map I packed the gear and paddled on in the hope of getting back to the car.

The rapids after the Wollongambe seemed longer and more fun with only the odd scramble over rocks. I had one portage at the Grade 4 King rapid which almost looked doable. I will definitely give it a crack with more water. I could only see one potential problem spot near the bottom section which required a hard right to avoid a rock which may only need another 6 inches of water to get over and around it. Next time..... 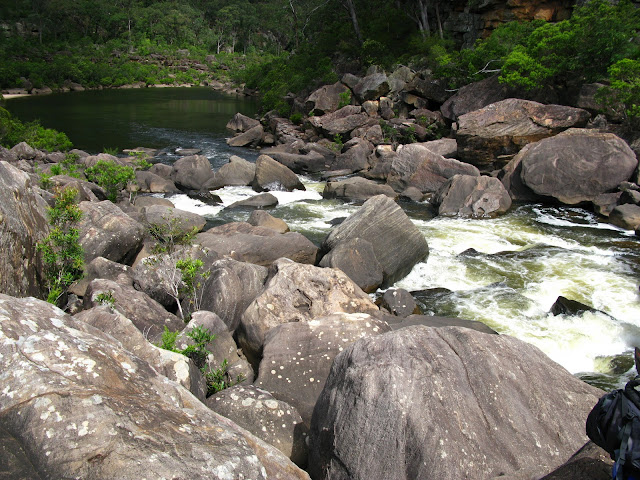 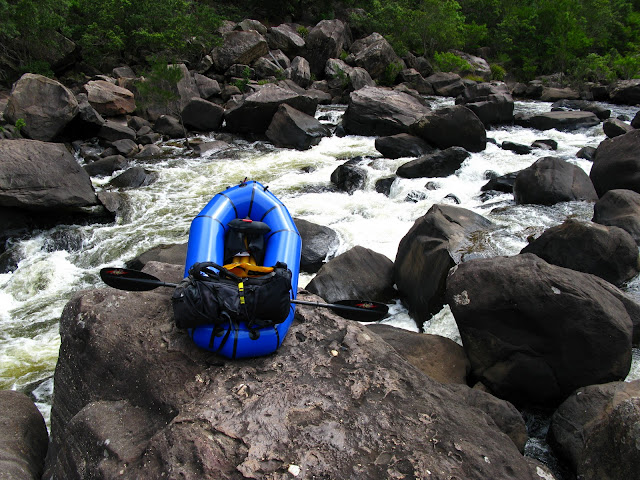 Towards the end of the day there was one fairly long flat water section and near some of the last rapids the carnage started to show with canoe's wrapped around boulders, rafts in trees and clothing strewn amongst debris from previous adventures. 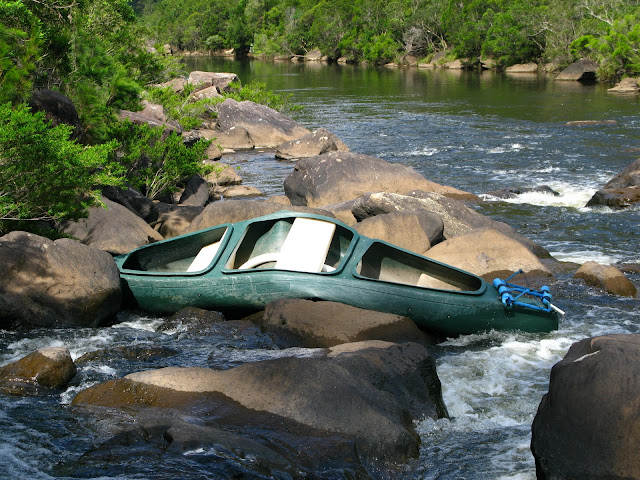 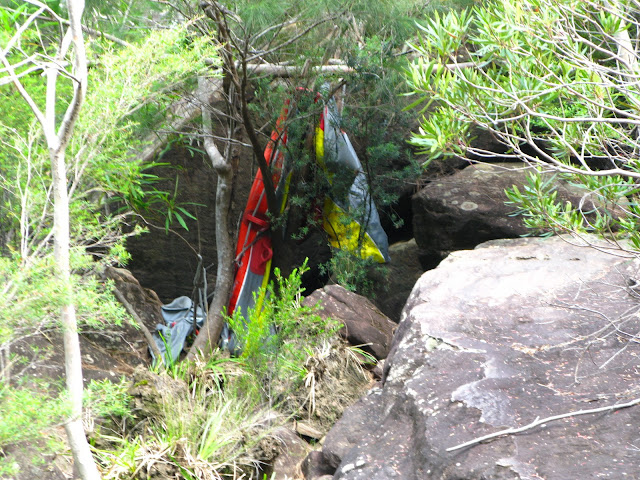 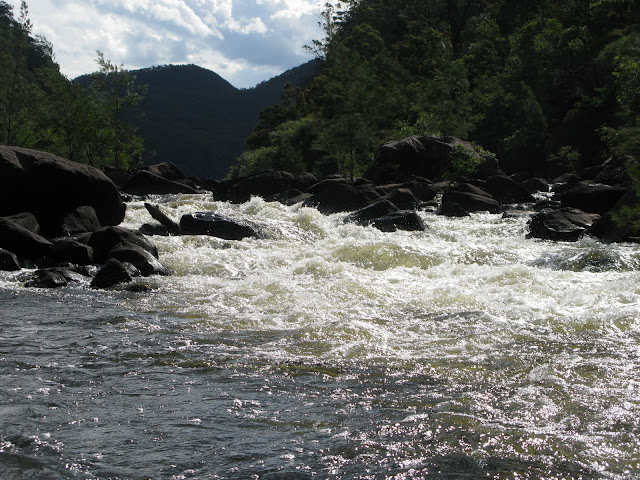 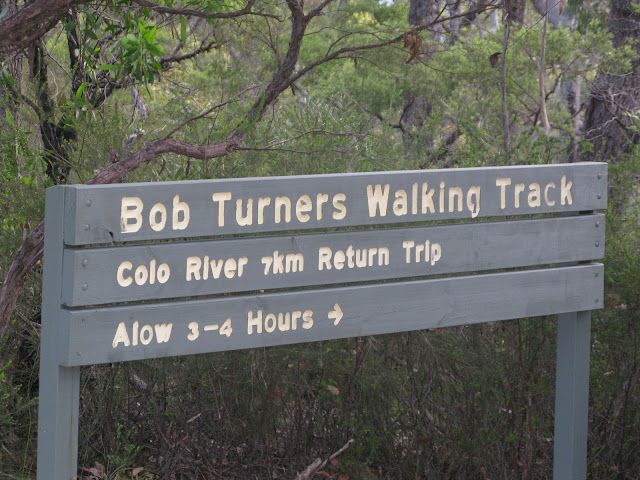 At 4.40pm I arrived at the Bob Turners track exit in time to be offered a cup of tea by a couple who had a great camp by the river. I respectfully declined as I still had to walk an hour back to the car and then drive back up to pick up my broken Bike.

Another hour's walk back to the car after a solid 8 hours of non stop paddling, I was fairly buggered. Over 45 kilometers in under 24 hours. Not a record but definitely an adventure for sure.....
Posted by D at 2:59 PM