ROCKY CREEK TO THE HAWKESBURY

To end 2010 and enter the new year I decided to do a Packrafting trip into some areas that would be difficult to access without some kind of lightweight watercraft.
My start point was Rocky Creek (canyon) which flows into the Wolgan river, then on to the junction with the Capertee river. From here it becomes the Colo river which then snakes it's way to the Hawkesbury river at Lower Portland.

I did some map work in the weeks prior and figured it was over 100 kilometers. As it turns out it was around 130 kilometers after doing a check with Google distance measuring tool although I'm unsure of the accuracy of it. Just to add a few extra K's, I left my bike in the bush at the end point for a 60 k ride home.

As usual it turned into an epic with 8-10 hour days of non stop bush bashing, boulder hopping, rapid smashing and paddling in an amazing part of the world. It truly is a place to immerse yourself in remote and rugged beauty. There were hundreds of rapids which required quite a bit of fortitude and careful scouting through the upper sections as the river was running at around 1.5m at the upper Colo gauge. The level may have peaked on the Monday up in the Rocky creek end.

After 6 days I'm home with some serious chafe from being wet for the whole week, one destroyed wetsuit, a pack which needs major repairs after snapping the internal frame and ripping attachments off the harness, and a Packtach system that requires a new clip.

It was one of the harder trips of late especially after carrying injuries from day one which wouldn't heal due to being constantly wet. I managed 20 kilometers on the bike before taking the soft option and calling for a pick up as Windsor had a temperature of 39 degrees that day.

Around 130 kilometers or more all up and one fatigued but rejuvenated soul. 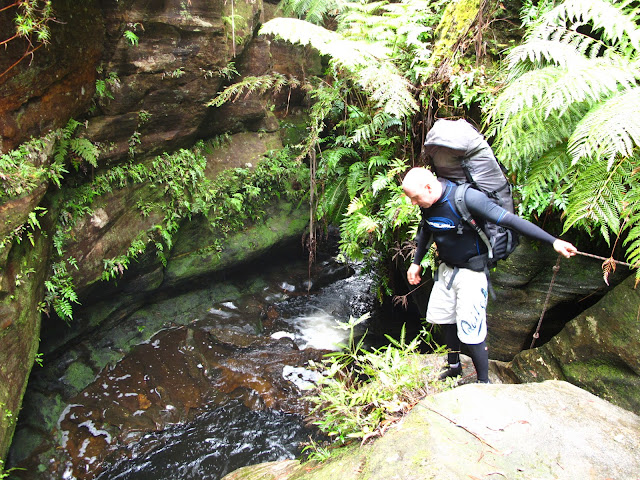 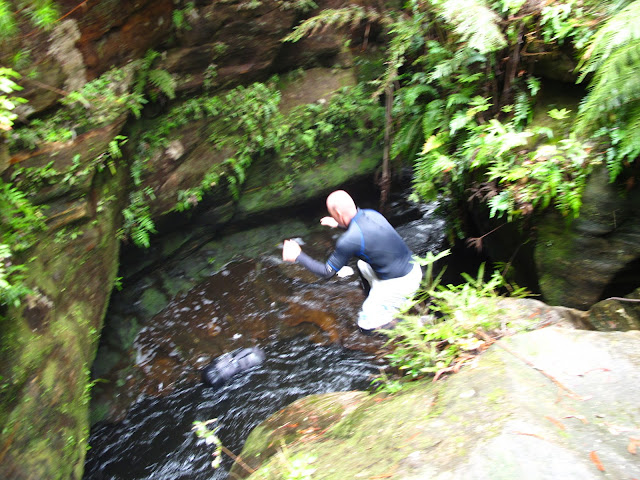 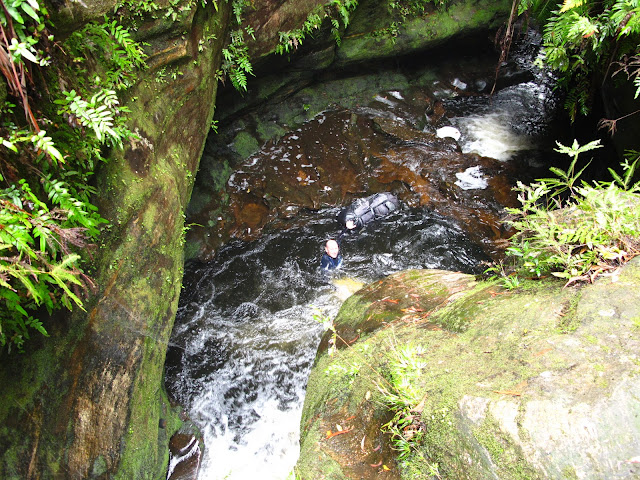 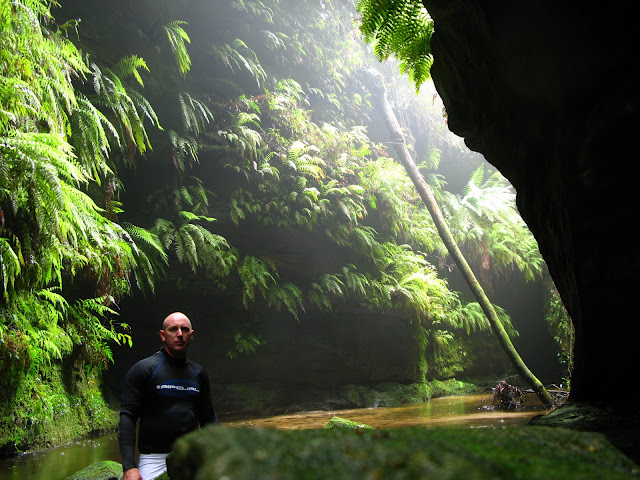 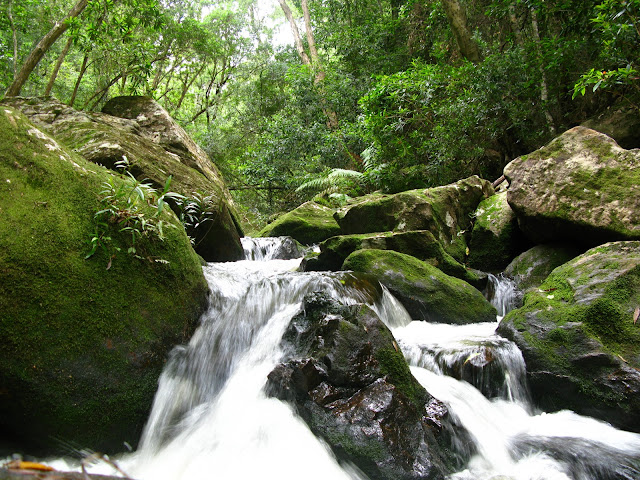 The first day in Rocky creek was hard but absolutely beautiful. Once out of the canyon proper, it was hour after hour of scrub bashing, boulder hopping and dragging a heavy wet pack in and out of the creek. This was one of the only spots big enough for my tent which as soon as it was up, I ate and fell asleep instantly. 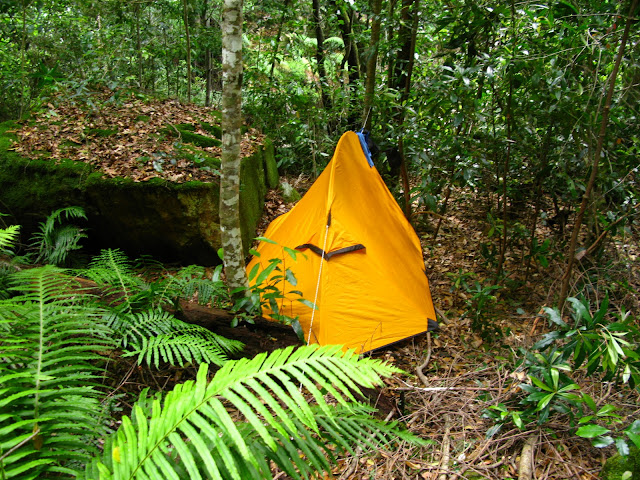 After 2 full hard days I made it to the Wolgan river which had me fairly excited about what the next day would bring with the packraft. The water was flowing well compared to what I had expected due to 20mm of rain in the previous 48 hours. 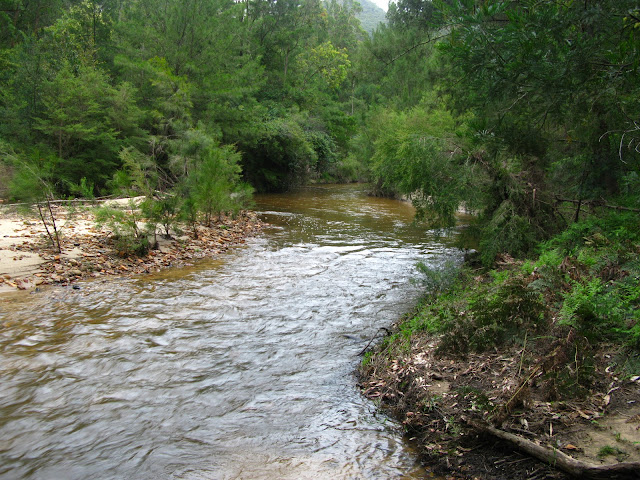 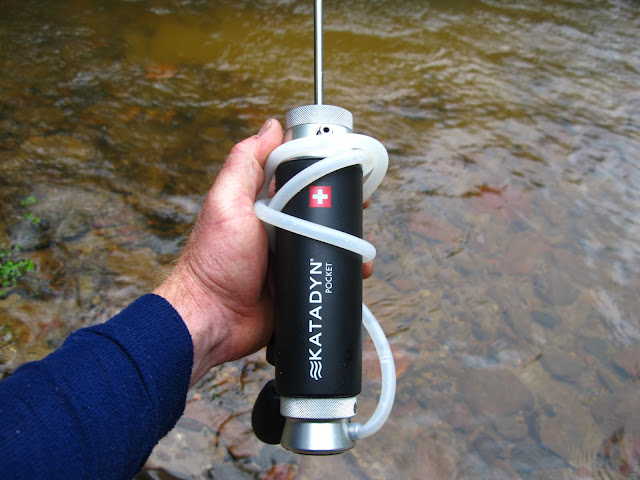 Due to having to take water when I need it which on this trip turned out to be quite muddy from all the recent rain, I took my new Katadyn water filter. It turned into a very useful item further down stream in the Colo. A reasonably heavy piece of kit but as I'm hard on gear I figured I need something that will be reliable and take a beating. 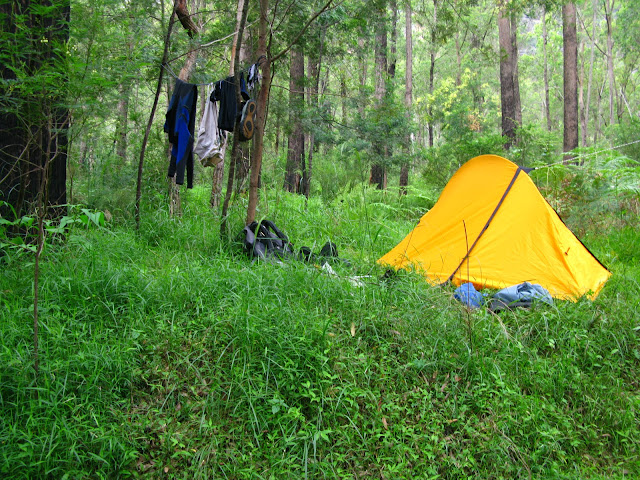 The camp in the Wolgan valley was spacious by comparison to Rocky creek. Excited by the potential daily distance I could make upon seeing the water flow at the put in, I pumped the raft up and thought it could only get better as there are hundreds of creeks running into the Colo. 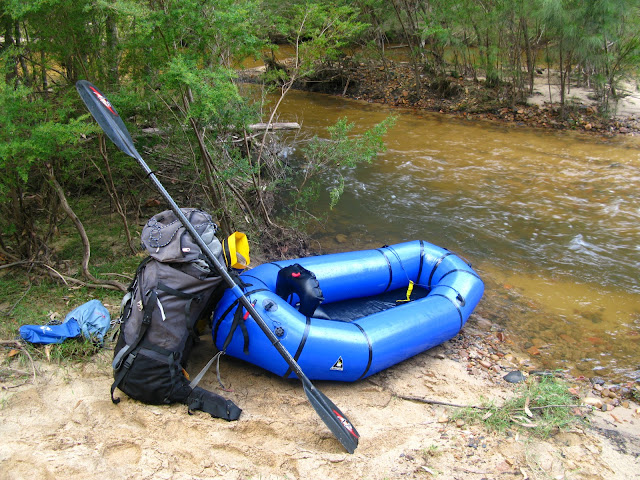 How wrong could I have been! Within 10 minutes I was back to dragging, hauling and scraping down rapids which started to take it's toll on my gear. Unbelievably the raft took an absolute punishing without any repairs on the entire trip. My pack on the other hand started breaking down. I cant speak highly enough of my trusty Macpac Torre though which has seen many tough trips with way more gear in it than it was designed for. I had it extended to fit at least another 20+ litres of gear and will definitely be getting it repaired as it's my favorite pack. 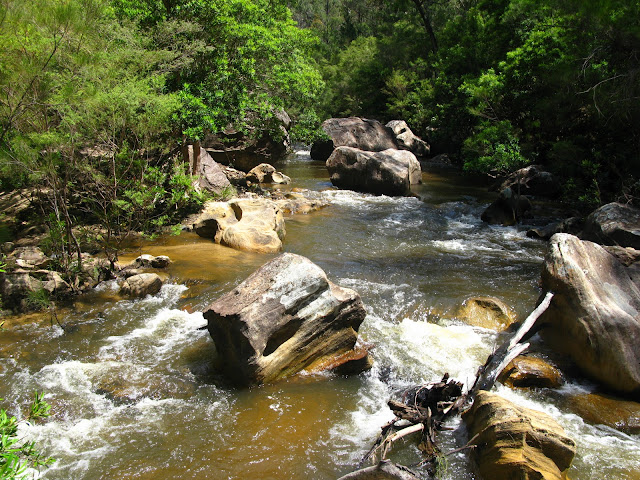 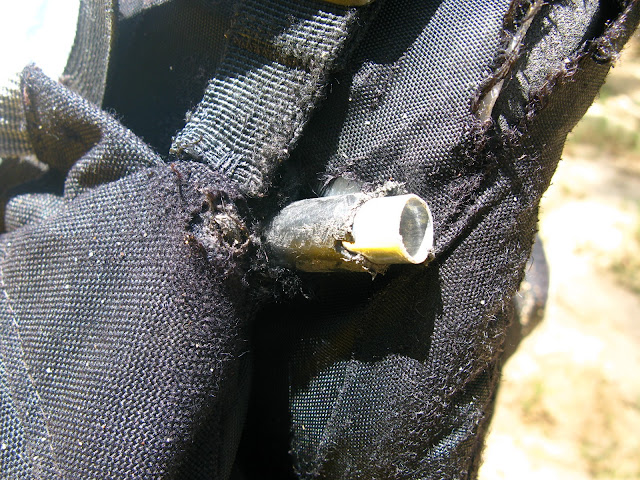 In the end this entire alloy C shaped bar snapped and the harness pulled off one side completely. 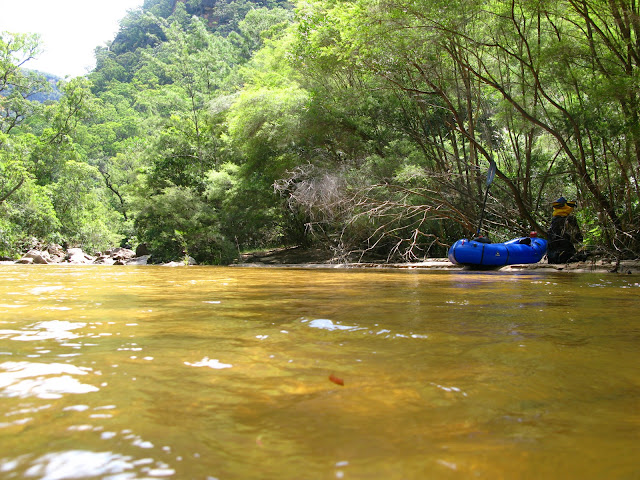 After around 12k's or so I came to the junction with the Capertee river which more than doubled the waterflow and had me a little nervous about the rapids as they were getting larger and faster. This junction meant the start of the Colo river so I pushed on in the hope of making as many K's as possible. 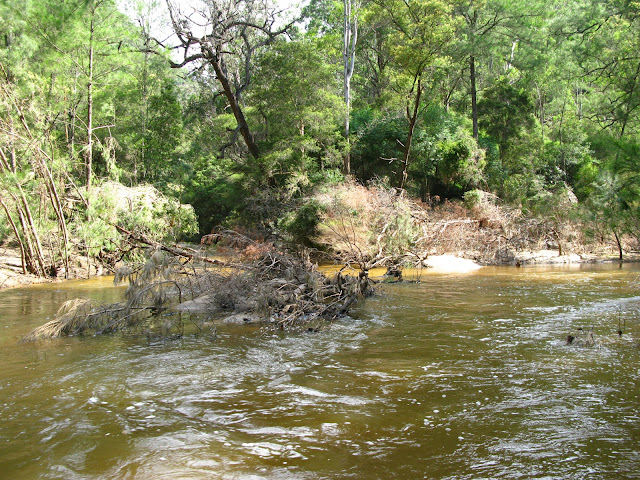 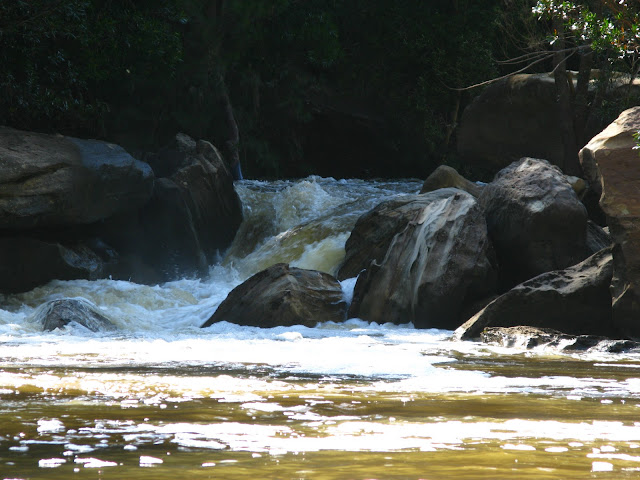 These rapids were typical on the Colo and as time went on they became stronger and more technical. Although they have been graded at 2-3, most of them were (given my lack of experience and the higher than normal river height) 3's, which turned into hour after hour of scouting, running them and trying desperately not to lose any gear.
My worst nightmare came to haunt me on one set when I passed through a tight chute and the paddle was ripped from my hands. I spent an hour with long tree branches trying to find it in the washing machine that seemed to be holding it. I had pretty much given up retrieving it when it simply popped up further down. Let me assure you that being that far into the gorge thinking I had to make a paddle from branches and rope while knowing how far I still had to go was not a good feeling....and the carbon fiber paddles aren't cheap. 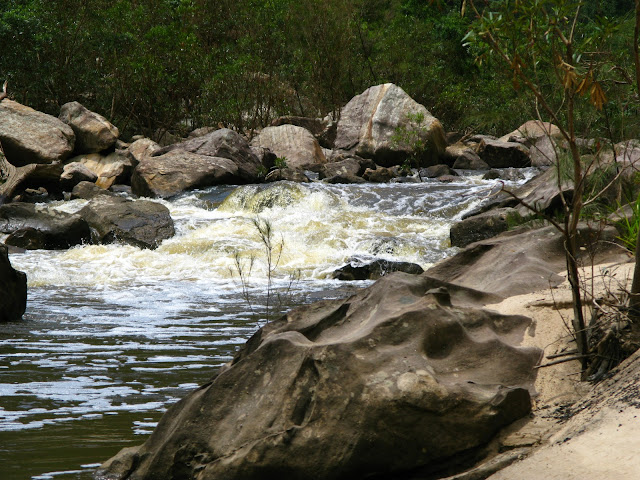 A short video here shows a Ghost boat incident after the raft slipped through my fingers while getting in position on a run. 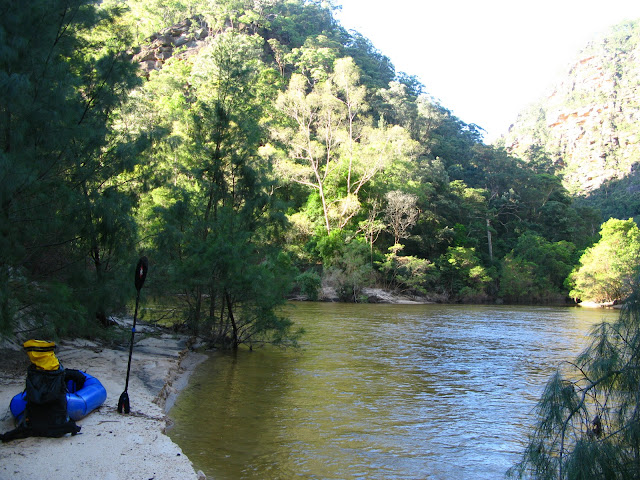 I camped at the junction with Wollemi creek and once again the river became bigger and I had to be careful of log jams and strainers which were frequent due to the recent flood which left a lot of debris. 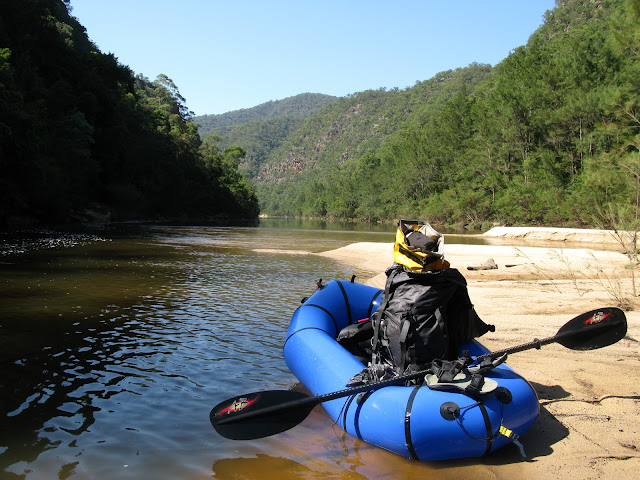 Finally the river started to widen out and the rapids ended. There was still enough water flow to make good daily distances until I reached the Putty road bridge which had me battling an incoming tide. I didn't finish paddling until 7.30pm on the 5th day and once again struggled to find a campsite due to private property, thick bamboo and Lantana. 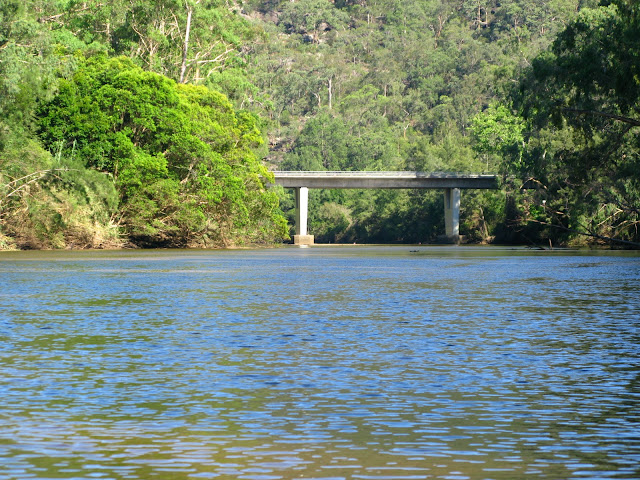 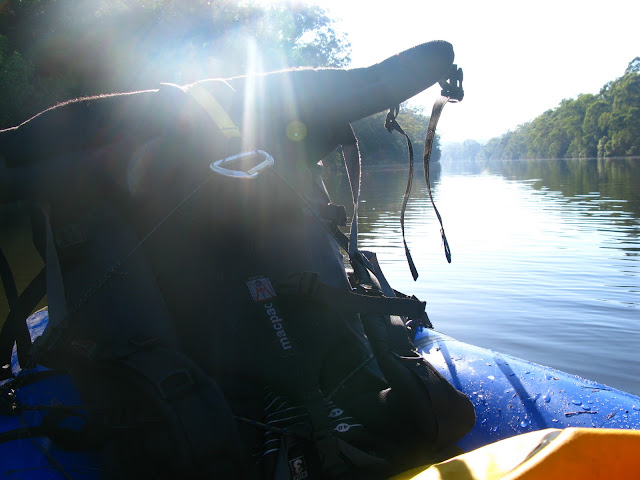 On the last day I was woken by fisherman flicking lures under the trees 2 meters from my tent so I was into it early only to battle the incoming tide again for the last 10 kilometers. The Hawkesbury river finally appeared at Lower Portland and the sound of ski boats was the end to the tranquility of the last 6 days. 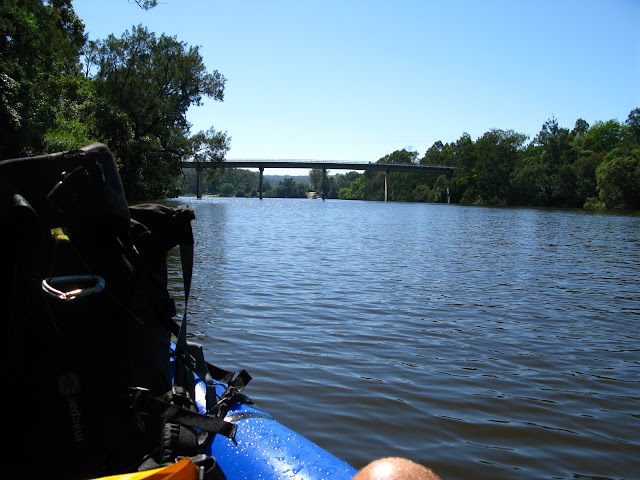 Finally stepping onto the boat ramp opposite the Lower Portland ferry had me pondering whether I should have chased the tide all the way out to the ocean but having water skied the length of the Hawkesbury a few times I was in no hurry to attempt it at paddling speed that day. 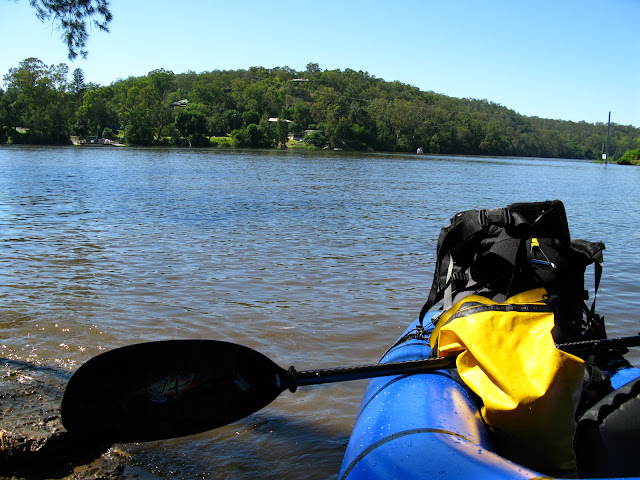 The next challenge after finding that my bike was still where I left it, was riding 60 K's home on a day that saw local temps hit 39 degrees. After doing 20 kilometers by lunchtime I made the call for a pickup but was slightly disappointed that I'd taken the easy option. It was hot, and with some painful wounds that would not heal I sunk into an air conditioned car content enough for now. 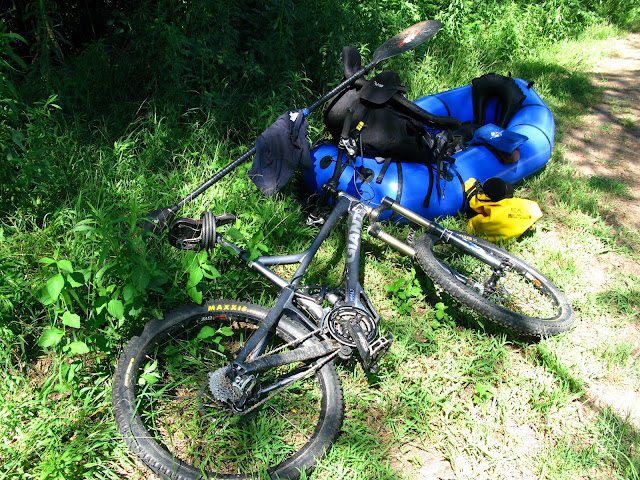 Definitely a tough trip but entirely rewarding. Without a packraft I doubt it would be an easy proposition in any sense. Good times.

First things first....
All times and routes taken are based on my own fitness, skill level and risk management. If you're not sure....add a few days. River height is critical to daily distance.

Ok, so I''ve added a few extra pics for Col with any info that still remains in the memory banks. Quite a few trips have gone by since the Colo, so most of what I do remember is probably not much help. The easy part is navigation....the tiring part is when you aren't paddling.
I have great memories from this trip as it combined three distinctly different stretches of water. For anyone considering Rocky creek....Give yourself plenty of time. Two days with a big load is taxing and probably not the kind of trip to undertake without experience. I could see how easily it may take twice that time if fitness and fortitude is left on the couch.

The Wolgan river looks like it could be an awesome paddle at higher levels than I had, but the reality of packrafting it from below the Rocky creek junction was a scrappy but enjoyable day. If you come from Newnes and take a packraft, the beauty lies in the knowledge that if it's lowish water and choked, you can simply jump out and walk down the fire trail until you get about 5 k's past Rocky creek. I paddled from this point to the Wollemi creek junction in one day. 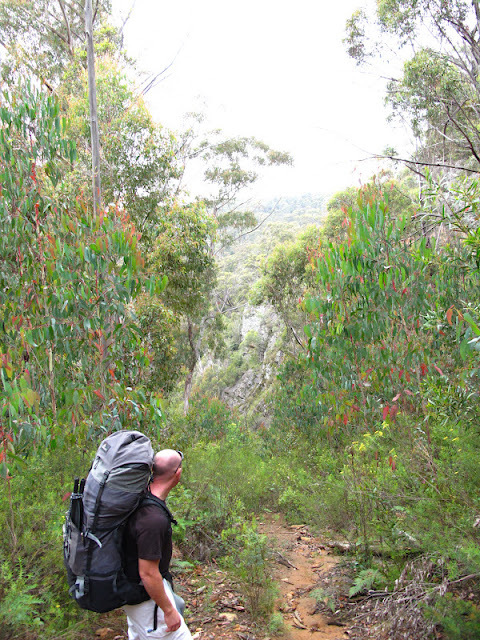 The Colo river is very much the same over it's entire length from a paddling perspective. Lots of long flat pools interspersed with rapids. From memory, I paddled every rapid with the exception of maybe two and the Grade 4 (King rapid). It was much quicker to paddle rapids than portage with a big load. So in summary, I can't give any hard facts or data related to locations of particular rapids or events. The trip for was great for that very reason as I had an estimate of my time on the Colo but not Rocky creek or the Wolgan. I just made sure I over estimated the unknowns and let the river do the rest.
I hope what little info I have given helps in some way and if you do a similar trip, let me know how it goes. Have fun.