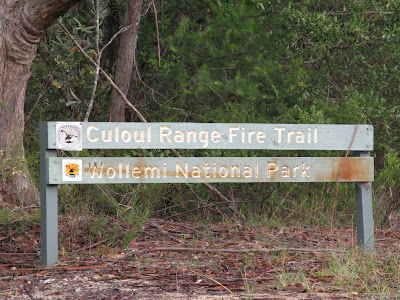 I've taken an interest in packrafting the larger tributaries running into the Colo river of late, and decided to check out Wollemi Creek. Within the boundaries of Wollemi National park lies some fairly rugged and difficult country which requires knowledge of the passes which allow you to break through the cliff lines and down to the creeks and rivers.

I had a day set aside to check out a pass from Crawfords lookout down to the creek which is only about one and a half K's upstream from the junction with the Colo river. The plan was to find a suitable exit point for a future trip starting somewhere near the headwaters.

I had a rough guide on the route so with a map in hand, I left the car at the end of the Culoul fire trail and took off at 8.30am. I took the single track, skiers right from the car park which heads out to Hollow Rock before descending back onto the main trail after ten minutes or so. 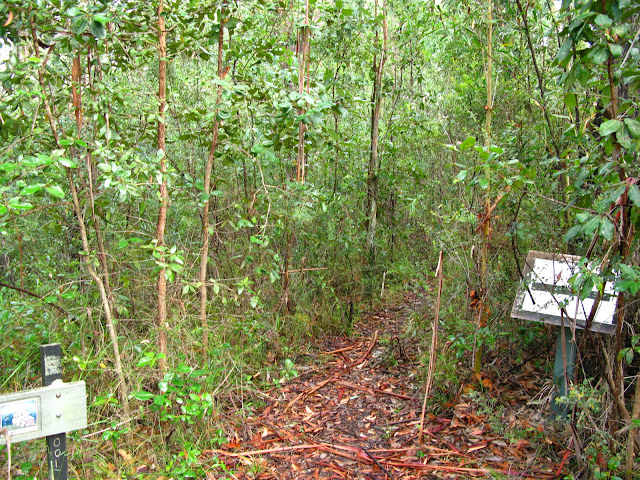 The signs were void of any legible information, and on the return journey I found the Wollemi Creek sign pulled out of the ground and thrown into the bush. I have my theories..... access to Wilderness areas is a privilege, and some very passionate people will defend it at all cost. 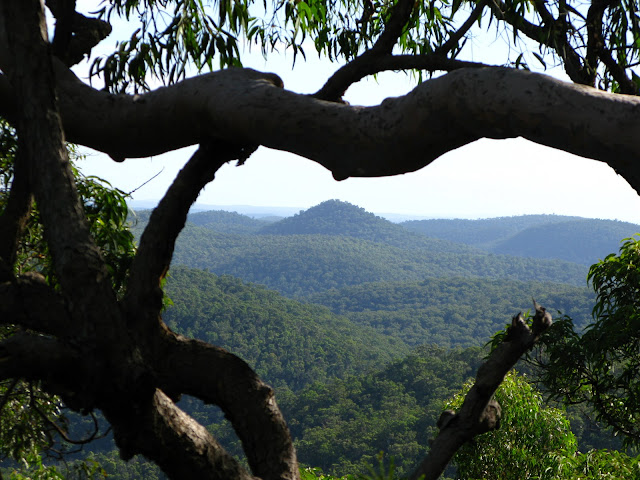 After a few K's I started descending down the ridge towards the lookout. I figured I had the navigation sorted, so away went the track notes as the first of several cairns appeared. The last thing I read was, once at the lookout (which is basically a rock platform at the top of a 300m cliff) head 200m to the right and straight down to the creek. 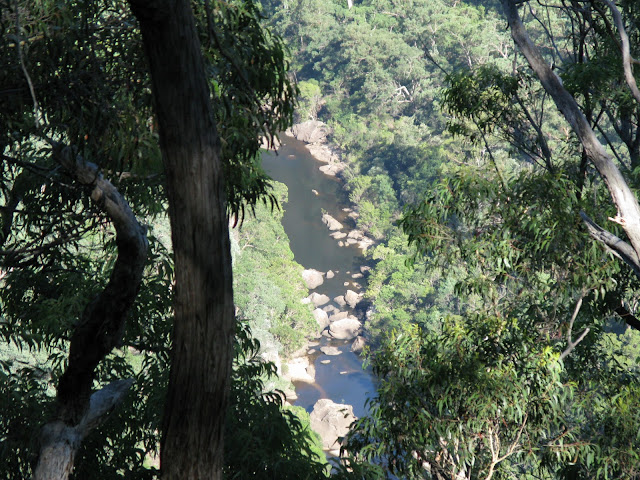 I had followed a fairly distinct track which led me to believe I had found the lookout and the pass due to the cairn line descending straight down the cliff 200m to the right. Had I read the last line of the track notes which clearly stated I should be on the south side of the ridge and not to take the track on the north side, I may have found the route slightly more forgiving than the one I took!


I put it down to complacency. I had the impression that there was no break in the cliff line and there was only one way down so I followed the cairns down, scrambling in a zig zag of exposed rock ledges and chutes filled with slippery dry leaves. I had 20m of 9mm and some gear but fortunately (or unfortunately) didn't have to use it. 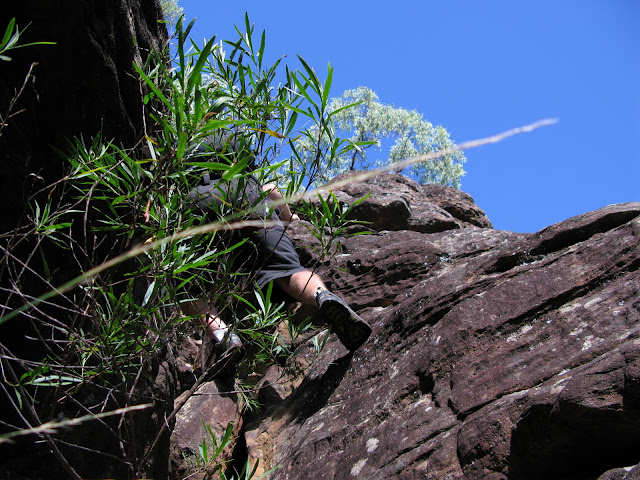 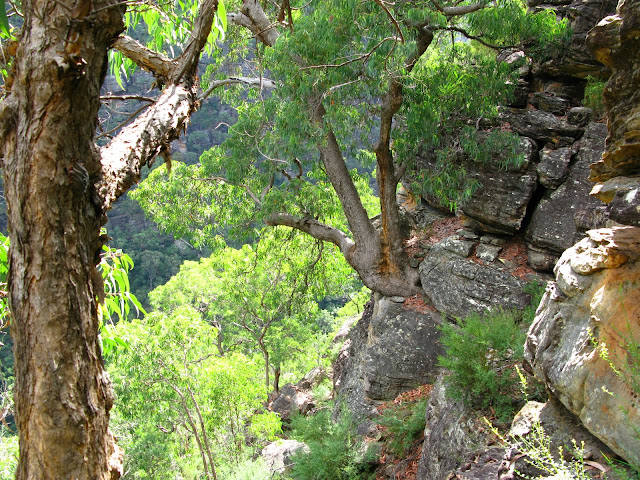 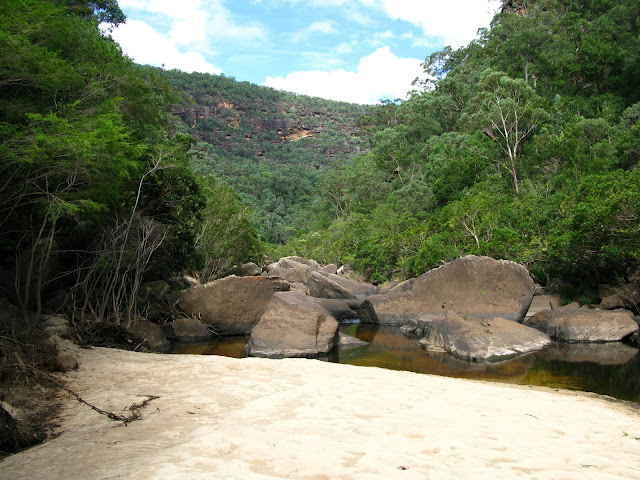 I finally reached the bottom and a nice spot for lunch. I took a few photos and tried to find something distinguishing to locate the pass from the creek. Very difficult but not impossible seeing as the pass is not far from the Colo junction.....and it looks like there are potentially two passes anyway. 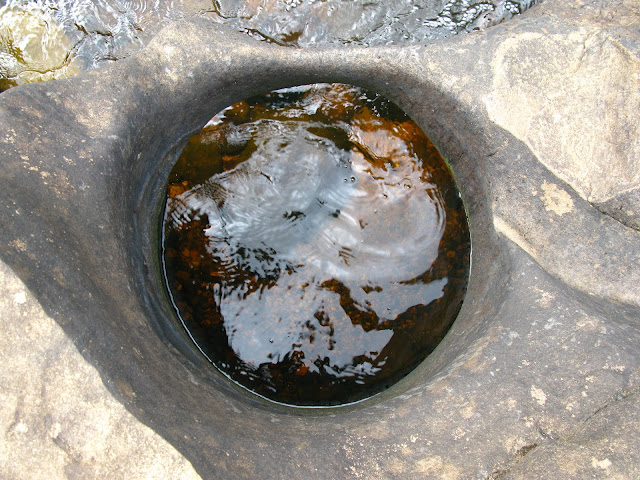 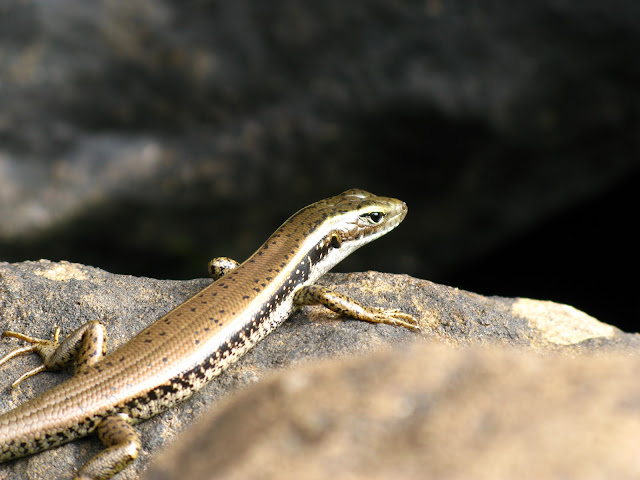 Climbing up was not as difficult, and when I arrived at the lookout I had the urge to jog back to the car which I reached at 1.30pm.

Now one day later I'm dealing with some very sore legs due to a lack of fitness and a renewed interest in finding the other pass......  All I need is 4-5 days off and some rain, and Wollemi creek may get it's first packraft descent.
Posted by D at 7:15 PM