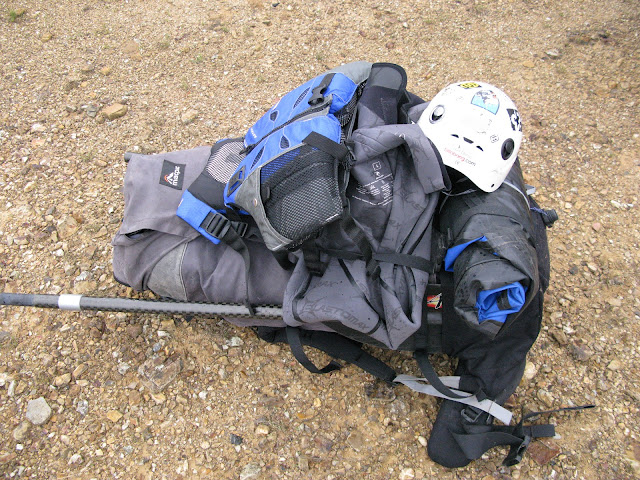 This years annual "Pain Campaign" was set to be a feast of adventure, which involved almost 300k's of packrafting, hiking and mountain biking, linking three distinctly different rivers. The plan was to start at Oallen on the Shoalhaven river, paddling down to Lake Yarrunga and on up the lower section of the Kangaroo river. From here it was a hike up through the Kangaroo valley to the head waters where I had left my bike in the bush for a ride to the beginning of the Nepean river, then on to the finish line at Bents Basin.
The campaign ended abruptly early on the second morning after missing an eddy and running what I now like to call the grade 4 accidental rapid, which resulted in a fractured and posterior angulation of the coccyx. Or in other terms, a busted arse....but more on that later.

After a late start around 10.00am, I began paddling with a dose of nervous excitement. The plan was to get through as much of the serious section as possible that day as the forecast was for 20-40mm of rain. The gauge was already above the minimum and it wouldn't need much to send it high. Down to Sewells Point is a fairly committing section of river compared to everything else I've paddle so far. With rain falling and the dark metamorphic rock sucking the light out of an already deep and foreboding gorge, I made quick time downstream until the heavens opened just before nightfall. 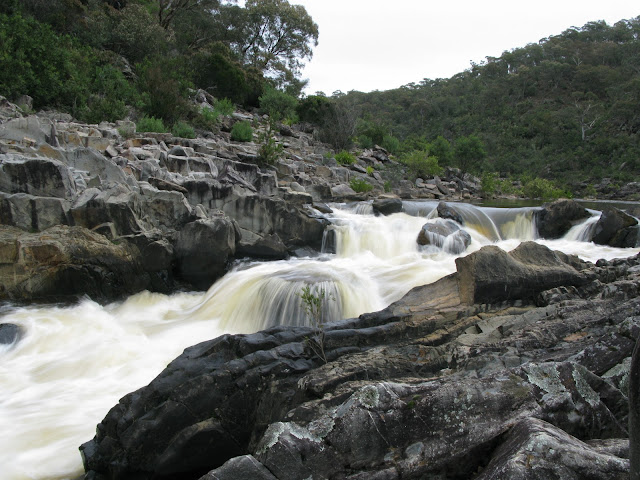 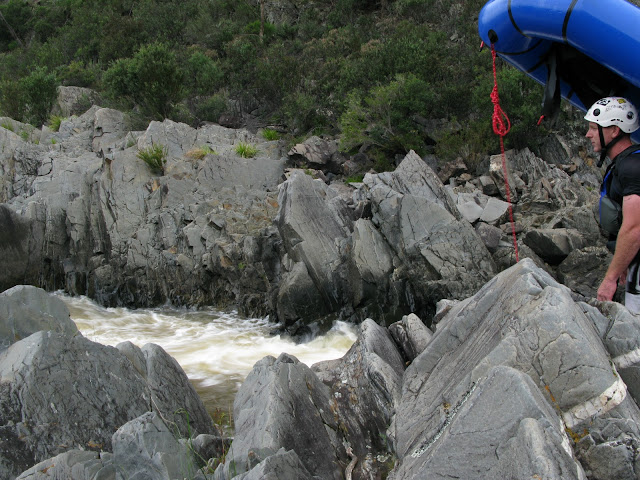 A friend (thanks Craig D.) had said before I left that there are some pretty full on rapids and be sure to scout everything, so I took his advice seriously but ran anything I felt comfortable running with an expedition size load. Solid grade 3 to 4 with two weeks worth of gear meant portaging the big ones, which turned into some fun scrambles along the way. Sometimes lowering the raft down with the haul rope and taking the plunge to save time. 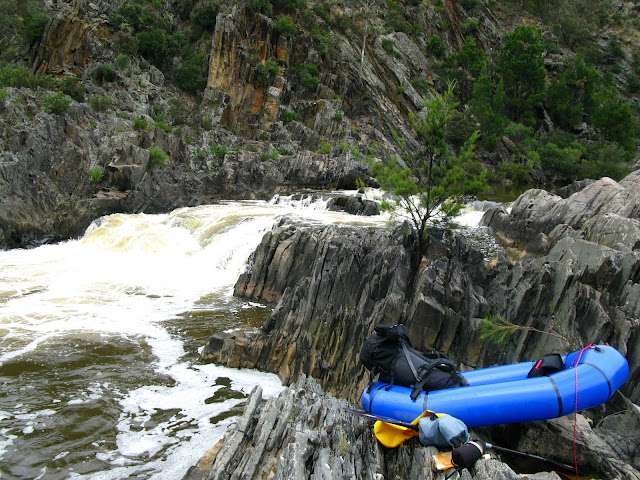 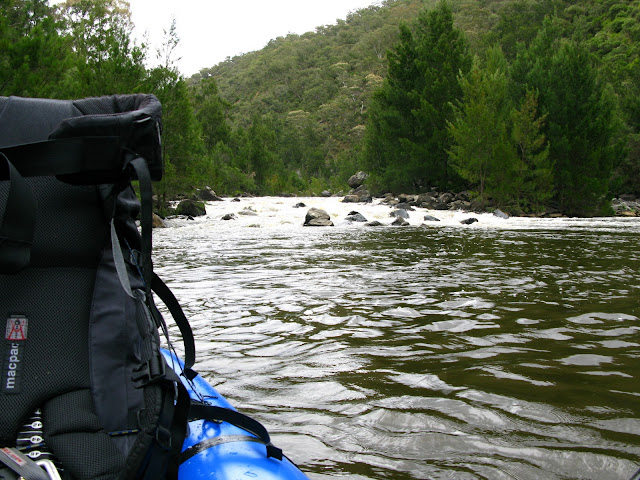 There were plenty of easier rapids along the way which helped make distance, and were light relief in between the long bouldery grade 3's. 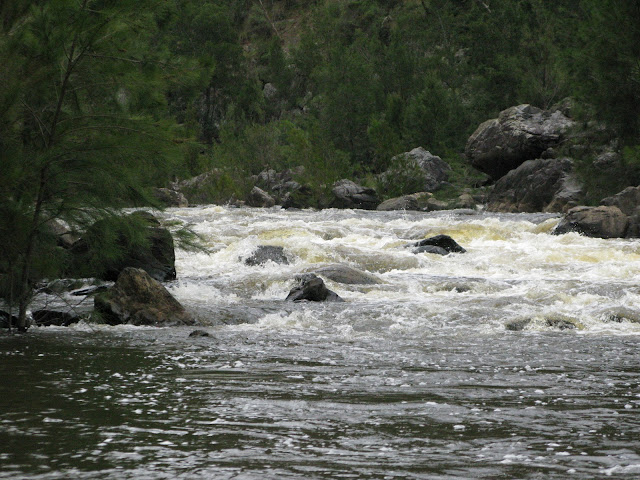 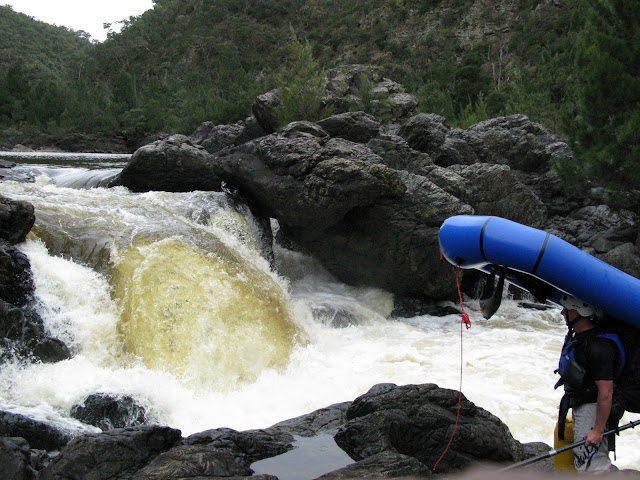 After Peggies Gully things got a little more demanding and the river just kept on producing incredible rapids and steep countryside which had me concentrating and focused the whole day. I was torn between stopping and filming some paddling and making as many kilometers as possible in case the river came up through the harder section. I figured I could film more below Sewells point where it mellows a little. 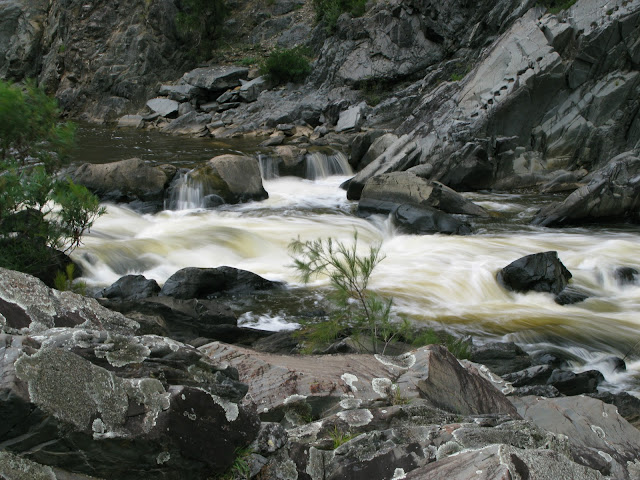 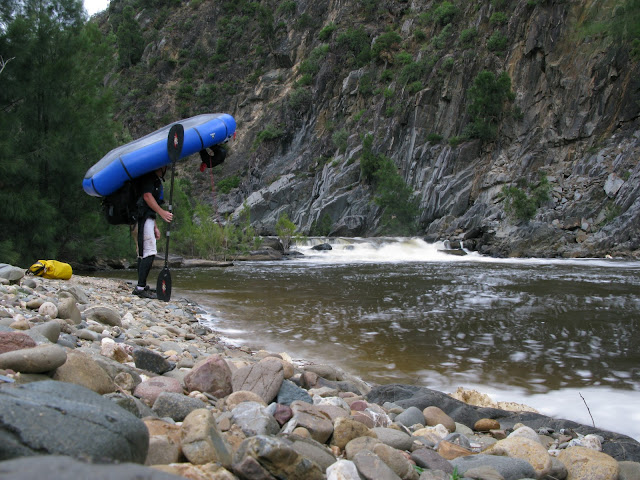 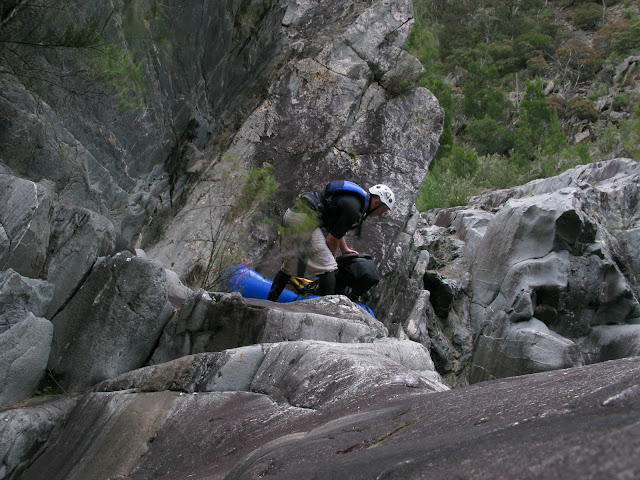 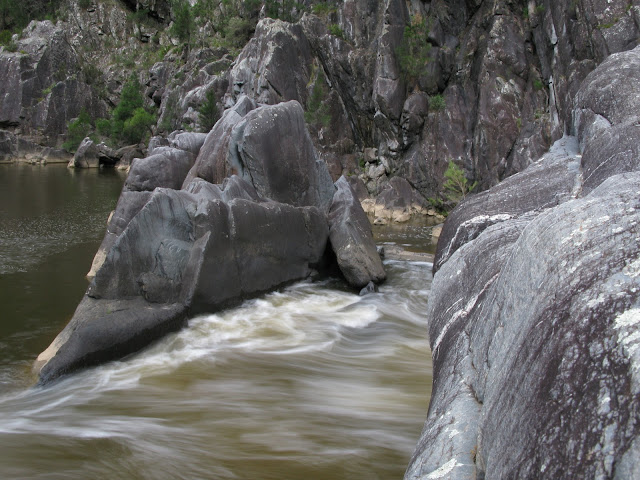 As the day wore on, the weather deteriorated so I headed for higher ground near some large, thundering drops and made camp in miserable conditions. After replacing as many calories as I could stomach, it was off to sleep with thoughts of a flooding gorge to keep me slightly restless during the night. 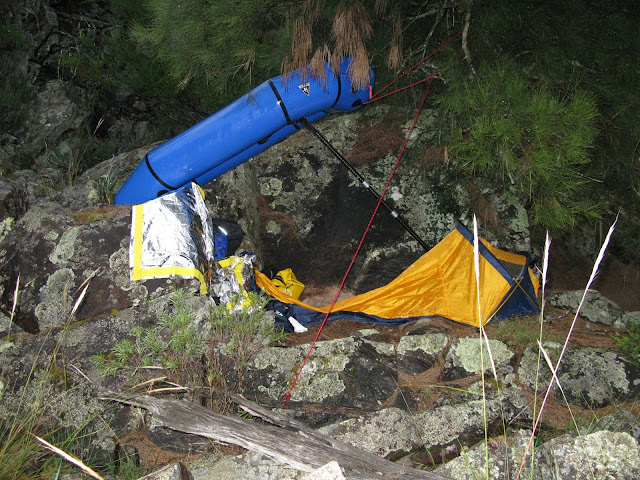 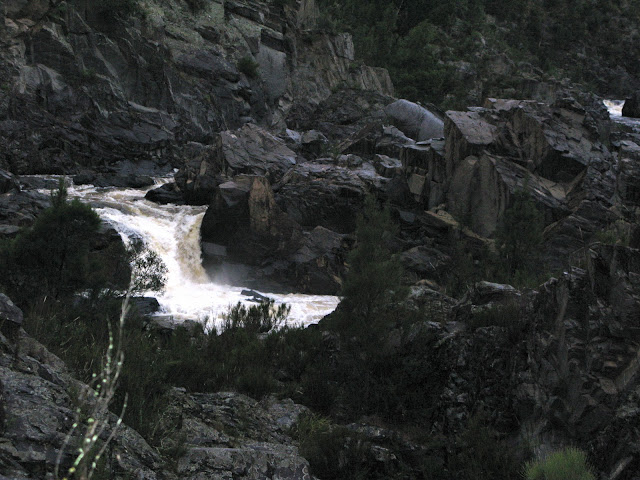 I had no doubt the Shoalhaven was a step up from the Colo River.... 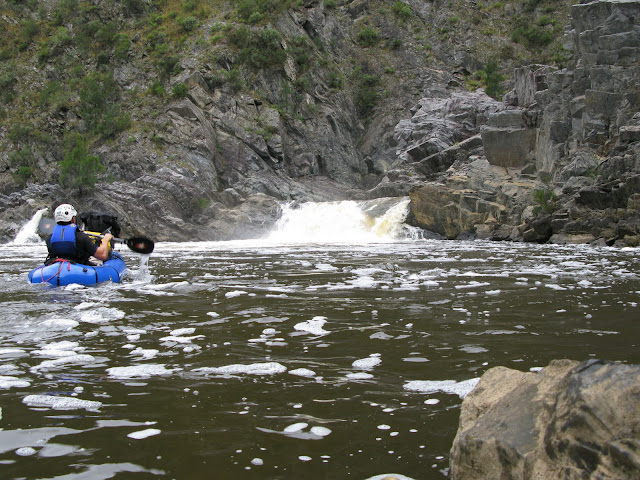 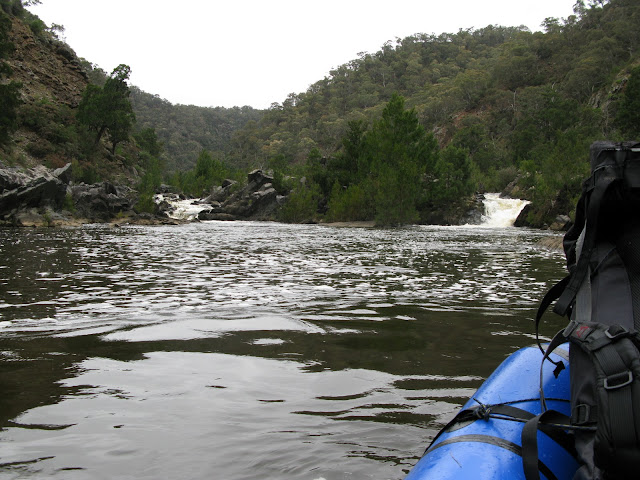 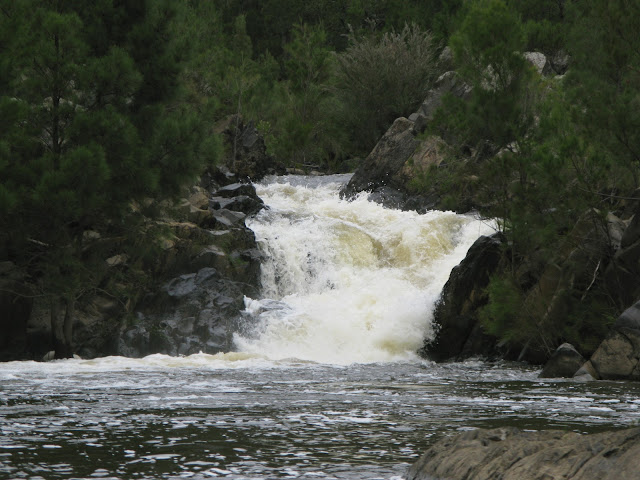 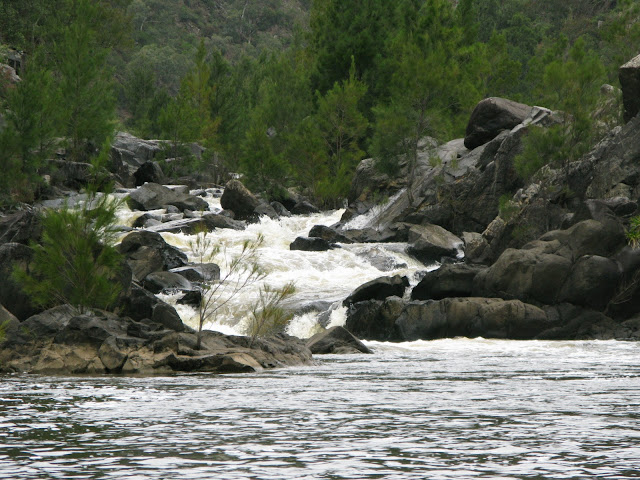 The next day I woke early and eager to get going, and as the day progressed, I settled into the best packrafting to date. The rapids were long and bouldery which had my confidence building and technical skill improving by the hour. I knew I could eddy out above larger drops which kept the average speed up which was of upmost importance in the bigger picture. 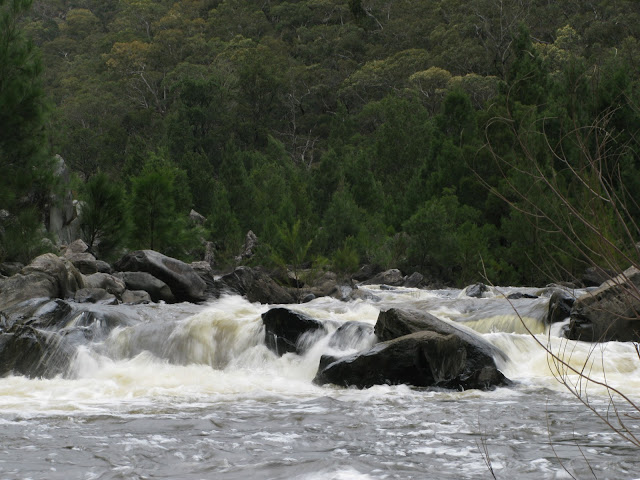 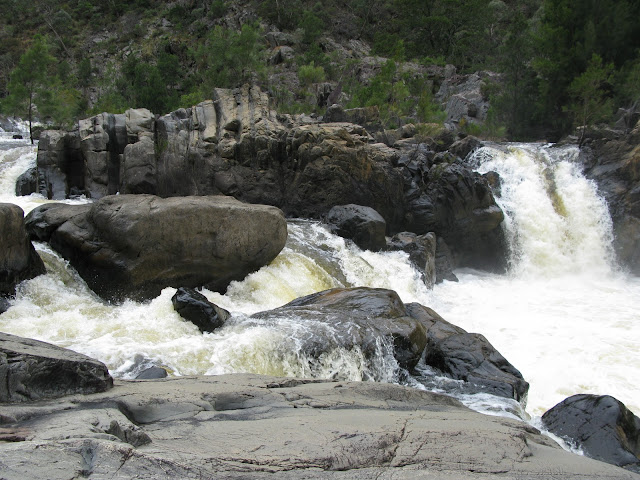 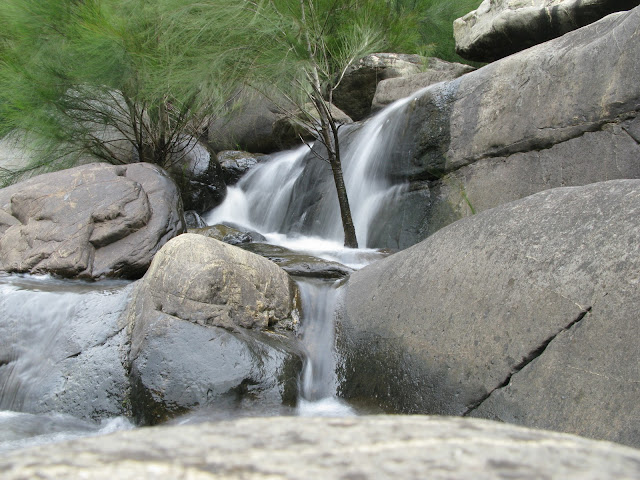 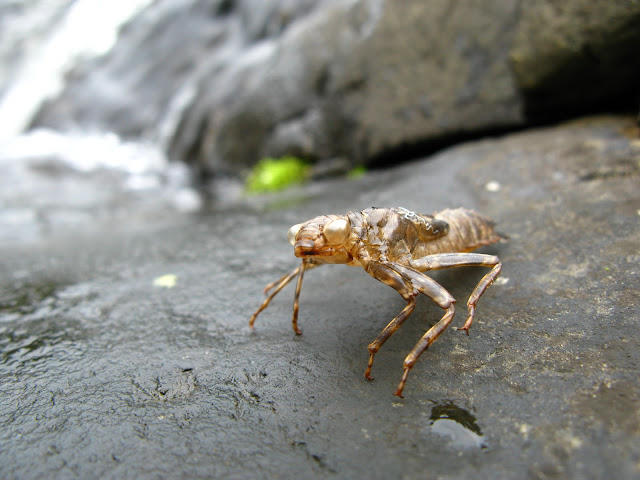 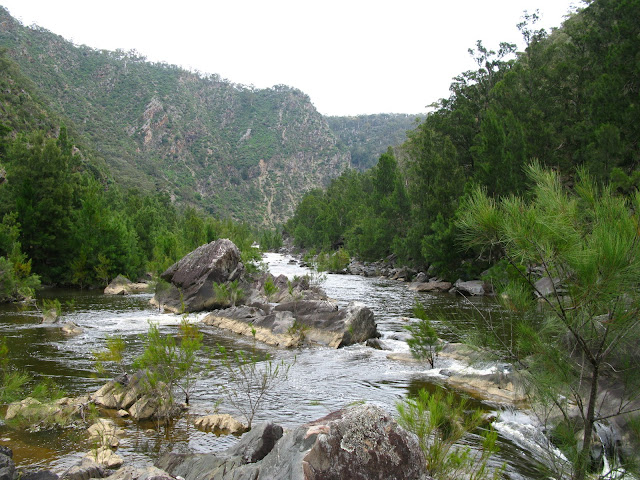 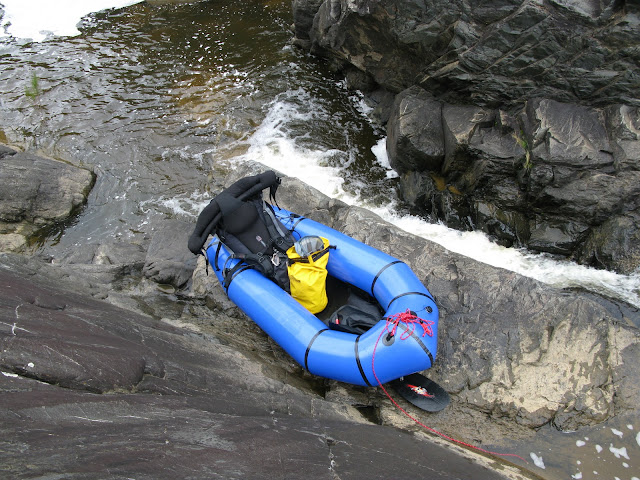 It was late morning when things took a turn for the worse. A long grade 4 appeared and I decided to run the top section and portage the lower drops to keep with the safety plan. The first stage was grade 2 at best but I somehow managed to bathtub the first drop which meant maneuvering the raft, which was less responsive to start with due to the load, extremely difficult.
I missed the eddy...
The second drop flipped the raft and I remember thinking, don't let go of the paddle but get to the f#$@^!* raft before the next drop. The large volume of water was moving fairly quickly and I hit numerous rocks before reaching the raft which had flipped again and in seconds I was in and paddling like crazy to straighten up before the 2 meter chute at the bottom. I lined it up just as the bow dipped and as I drew breath it became dark and I felt the power of the water drive the raft deeper than expected. It sandwiched, and I felt the full force of the pack against my chest before surfacing perfectly!!!
The adrenaline had completely masked the bashing along the way and the stoke had me laying back in the raft soaking up the view of what I'd just descended. I pulled up on a rock to empty the water out and as I sat up, something didn't feel right. As I stood, pain shot through my tailbone. Just another bruise...I had plenty already along with grazes and a few cuts.

Not so....after the next couple of rapids it became apparent I may have actually broken it. Portages became just as painful as trying to simply sit in the raft let alone paddle rapids.

Within an hour I could no longer paddle any rapids without lifting my backside off the seat which left me only one hand to paddle....I was within a kilometer of the only pullout point I knew of but tried to convince myself it was not that bad. The river settled to grade 2-3 from Sewells down to the dam (2 days paddle with good levels going hard) but in this state it could take 4 days and I couldn't paddle anything. 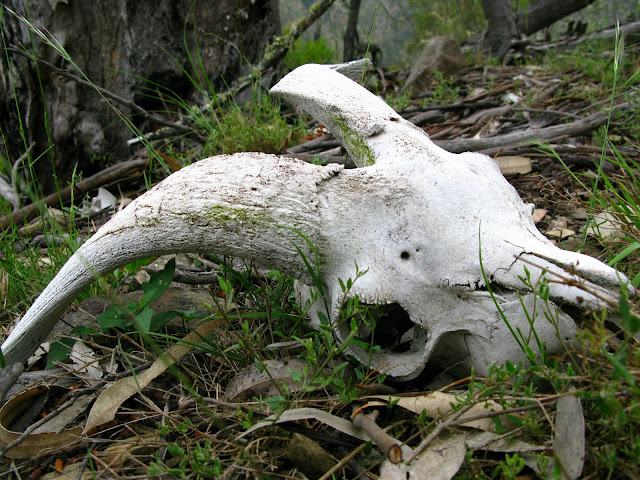 I had lunch at Sewells at 2.30pm and discovered I could no longer even sit on a rock. Disappointment and anger set in as I checked the maps. My map only showed 2 K's from the river and had a myriad of firetrails to choose from in the hope of hiking out to Windellama, the only town I could think of that had any chance of getting a call out. The climb out of the gorge with a big load and broken tailbone was testing but I tried to find the positives and stay focused.
There were no positives but managed to stay marginally focused until playing roulette with the firetrails, choosing one of four that headed off the edge of the map. 5 kilometres on and darkness setting in I realised this one may not be the correct one so I hobbled back a kilometer or so and set up camp in the hope of picking the correct one in the morning. 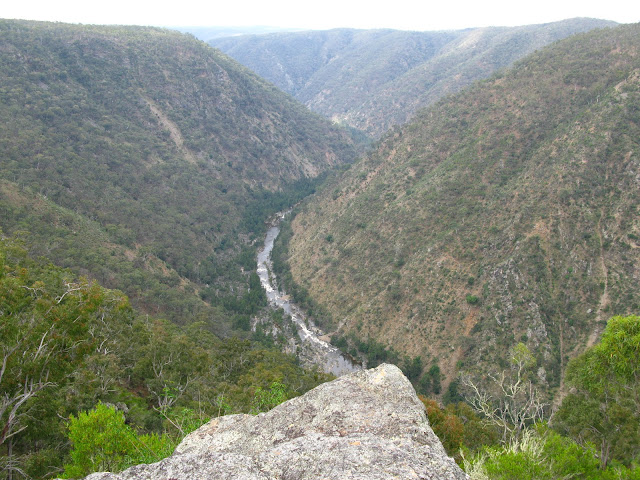 Sleep was tough as the pain increased during the night so I was up and into it early, determined to get out. Thankfully I hit the correct trail and hiked the 16 kilometers or so to Windellama before luck played its part. Just as I arrived a lovely Syrian chap pulled over and out of kindness offered me a lift to Goulburn. What an amazing story his was, and as I raised my backside off the seat for the 40 kilometer drive I thought life's good and what a lucky country we live in. For that short trip the pain almost disappeared as perspective slapped me fair in the face. Thankyou mate.....I won't soon forget. 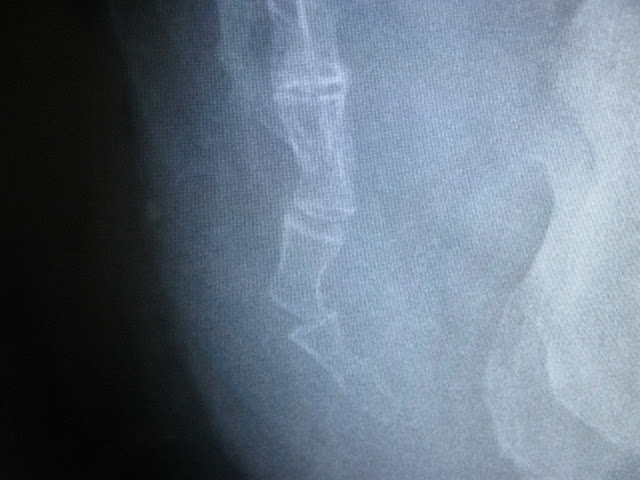 .... so with one bone fractured and compressed, and looking like a dented coke can, another doing some weird angle thing, the idea is, surgery is not necessarily needed for this type of injury. Medicate as needed and don't sit for long periods. I can't sit......and "self medicate", has a certain zing to it.
Merry Christmas...... :-)